We will fight for Aarey again - tribals and activists resolve

Within hours of swearing-in, the brand new Shinde-Fadnavis govt decided to move Metro car shed back to Aarey.

Prakash Bhoir, Adivasi activist and resident of Kelti pada in Mumbai’s Aarey Colony says he could not sleep for a moment last (June 30) night. All he could think of was how to save his home? How to rebuild the movement, the protest that saved his home, India’s only urban forest - Aarey - the last time.

Within hours of swearing-in, Maharashtra’s brand new Chief Minister Eknath Shinde (rebel Shiv Sena leader) and Deputy Chief Minister Devendra Fadnavis (BJP), made the decision to move Mumbai’s Metro car shed back to Aarey. In 2019, the decision to build the car shed in Aarey had brought the wrath of the people not just from Aarey or Mumbai, but from all over the country, to the then Fadnavis-led state government. The activists and adivasis who fought back then now say that they are ready to fight again. People will stand for Aarey again.

“They are here to govern the state. There are several issues that the state is facing at the moment. But they decided to get back to us with the car shed decision, in a very childish manner. It’s the environment that you are talking about. How can they be so vengeful?” Bhoir questioned.

Manisha Dhinde, activist and resident of Maroshi pada in Aarey says, “Tribals are completely dependent on the forest for their lives and livelihoods. They are trying to snatch whatever little forest in Mumbai is left with Adivasis. We cannot let them do it.”

Sundays for Aarey..
Citizens throng Aarey to protest against the inaction & lack of clarity as the construction work progresses inside Aarey.
Citizens demand to either expedite relocation of carshed to kanjur or BKC/ kalina..#SaveAareyForest pic.twitter.com/TGuGFHZiiF

While Shiv Sena was then Bharatiya Janata Party’s alliance partner in the government, back when it all started, it had opposed the government decision and stood with the people. When the Maha Vikas Aghadi (MVA) government came to power in 2019, comprising Shiv Sena, Nationalist Congress Party (NCP) and Congress, it moved the car shed site to Kanjurmarg. However, as a new government is forming in state after a dramatic turn of events that overthrew MVA, one of the first decisions that the new CM and Dy CM made was moving the project back to Aarey.

“It will be interesting to see who is controlling all of this. Because Shiv Sena has always stood with the people in this matter. When Shinde himself was Urban Development Department (UDD) Minister in the MVA government, he had given statements saying that if houses can be built on the Kanjurmarg plot, then why not car shed. Shinde now says that his group is the real Shiv Sena. Then by that logic, they should adhere to Shiv Sena’s stand that it will always fight for Aarey,” actor and activist Harshad Tambe said.

While the MVA had prepared to take the car shed to Kanjurmarg, the Bombay High Court had, however, imposed a stay on that decision in December 2020, due to litigations involving alleged private ownership of the said land. However, the court, earlier this month, set aside the decree that granted ownership of the 6,000-acre land in Kanjurmarg to a private firm. It stated that "huge fraud was played on the court" while obtaining that order. This could have opened doors there for the metro car shed. But the overturn of the MVA government changed the picture. 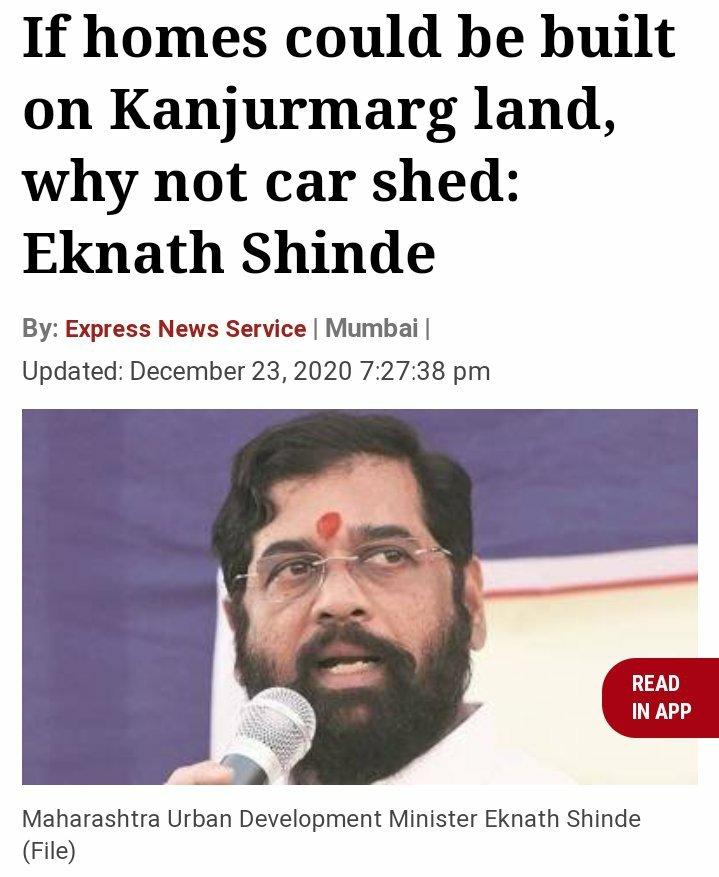 “It’s not easy to build a people’s movement like we did last time. We have to start from scratch. We will fight for our home, definitely. An adivasi will never think twice to fight for the forest. Nature is our God. Aarey is our home. But the other people who joined us last time, the students, youngsters, they suffered a lot too. But there will definitely be a protest, we will fight,” Bhoir said.

As far as regrouping of the people is concerned, Tambe says, “Metro car shed is not the only threat to the Aarey forest. There have been issues before and after the Aarey protests as well. Fires are started to clear land in Aarey, trees are cut for road widening, so the fight for Aarey has continued even after the car shed was moved out. BJP’s antics to obstacle car shed in Kanjurmarg were still active. And so were the core activists in the protest.”

Dhinde was detained twice during the Save Aarey protests in 2019. She is ready to do it all over again. She says, “We have the support of even more people this time. The protest, if it starts, will be much bigger this time than the last time.

Moving the car shed to Kanjurmarg was one of the first decisions Thackeray had made after he took over as Maharashtra CM. “On the other hand, he got his own pet project - coastal road - cleared in the court. Aarey car shed was Fadnavis’ pet project. It’s all really frustrating,” Tambe said.

It’s not just the lungs of the city that will be under threat due to the car shed project in Aarey. Tambe adds, “The car shed is like an opening door for them to bring multiple projects in the area. They want to turn it into a new Bandra Kurla Complex (BKC). Concretisation of floodplain area for BKC intensified Mumbai’s flood situation, which led to July 26 floods. The area assigned for the car shed lies under floodplains of river Mithi. They have already filled mud there, which led to floods a couple of years ago. Those floods will only intensify further if the car shed comes back here.”

Heavy rainfall led to flooding in several parts of Mumbai.
The worse is yet to come..
So Mr Fadnavis a carshed at Aarey built on the floodplains of Mithi river will not trigger the flooding or degrade the green lungs of Mumbai?#MumbaiWeather pic.twitter.com/aw6rcto2Yc

In September 2020, the Uddhav Thackerey-led MVA government announced that around 800 acres of land in Aarey near Sanjay Gandhi National Park will be declared as reserved forest. However, the proposed area for car shed does not come under this.

Bhoir said that the area where last time the government had cut the trees overnight is now gradually getting greener again. “There have been two monsoon seasons since. Plants have found a way to grow back there, the forest is reclaiming its land. How can the government even think of destroying it again?” Bhoir asks.