"A vote is not a bargain for silence without dissent," students say

“I, as an Indian, condemn this inhumane lathi-charge on the students of JMI and AMU; I use Indian here intentionally because I have to justify my Indianness to live in this country. The present government is trying to crush every voice against it. But we are the students of the country, we are the youth power, we are not going to cower down to them. However, they try to stop us we will rise with the more force.” said Ruksana Sheikh, a student leader from SPPU, Pune. She was present at the demonstration on the SPPU campus.

Over 700 students and citizens staged a protest on the Savitribai Phule Pune University (SPPU) campus on the eve of 16th December to express solidarity with the students of Jamia Millia Islamia who faced coarse police action for agitating against the Citizenship Amendment Act (CAA). Citizenship Amendment Bill 2019 was signed by the President of India on 12th December 2019 and is now an Act.

In the wake of country-wide protests against the amended citizenship Act, Indian universities and institutes are strongly, ahead, against it. On Sunday, 15th December, Jamia Milia Islamia University students were protesting the contentious Citizen Amendment Act. On the allegation that the demonstration was violent and to control the situation police had to take an action against the protesters. The police with the lathis and batons entered the university library, hostels, and bathrooms and beaten up the students ruthlessly and lobbied tear gas in the closed halls.

Late in the evening, Aligarh Muslim University students had come out on the street. The local police did the same with the AMU students.

In both cases, Police have been accused of brutally attacking the students and of using excessive power. To show the solidarity to these students and to protest against the CAA and NRC many campuses across the nation have evoked. Students from the Indian Institute of Technology (IIT) Bombay, Tata Institute of Social Science (TISS) in Mumbai, Hyderabad Central University (HCU), Jadavpur University in Kolkata, Dr. Babasaheb Ambedkar Marathwada University, Aurangabad and IIT Madras expressed the support to support students in the two campuses. 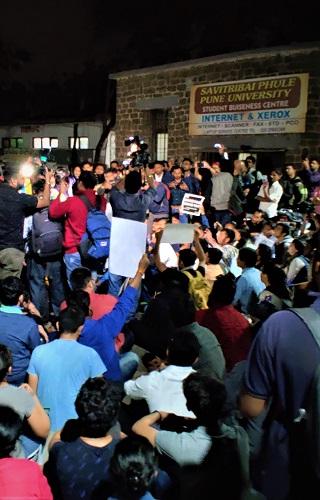 There is huge disappointment among the students regarding the actions taken place against the whole student fraternity. In the SPPU protest, students were sloganeering against the government and the moves done so far. Students were holding the photo-frames of Mahatma Gandhi, Dr. Babasaheb Ambedkar and Bhagat Singh and the placards with the messages such as 'fascism down down,' Don't sell our Country', One Nation, All Religion', ‘We oppose NRC, we oppose CAA’. The slogans like ‘HUM EK HAIN’, ‘LADHENGE JITENGE’, ‘INQILAB JINDABAD’ and ‘HUME CHAHIYE AAZADI’ were all in the air.

Rahee Shruti Ganesh, alumni of JNU Delhi told, "Every student has something to say as everyone is thinking that this is an attack on each and every student in the country. It is an attack on our very right to education and free speech. And students will fight this battle till the end and will definitely win it.”

Nikhil Ekade, a member of Navjavan Bharat Sabha directly attacked the fascist nature of the government, he said, “Democracy and the human rights are on the stake because of the rise of fascism in India. The fundamental rights in the constitution are in danger; citizens have to strive to get it. This vigorous protest should be well managed and shouldn’t wander from the main cause.”

When asked about the recent attacks on the students and their spaces in major universities he replied, “Whenever the state is at wrong, the students there have taken up the issues and protested against it. Even if we see the freedom struggles of any country we will find a very crucial role of the students in it. It is certain that in such circumstances, students will be attacked. The power like this will always try to tackle the intellectual centers because it is intellect-phobic.”

Atik Patel, a student of the Department of Political Science, SPPU, questioned, “Why the student or anyone who is protesting against the government is unwanted and beaten by the police and the anonymous attackers? What is that the government and the administration are afraid of?

According to The News Minute, protests have also been planned in IIT Madras, Pondicherry University and Indian Institute of Science (IISc) Bangalore. Reports also said that the Students’ Federation of India, the student's wing of the CPI(M), will hold protests in Trichy, Coimbatore and Tiruvallur to protest against the Citizenship Amendment Act. Students of IIT Bombay also held a protest march against the violence. 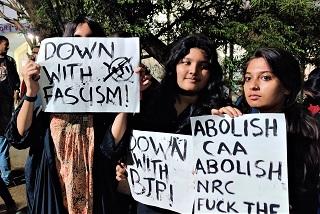 Vaibhav a student leader from Ambedkarite Student Association of Tata Institute of Social Work (TISS), told about the future protests they have planned in Mumbai. He said, “We have planned to boycott the classes on 19th December and will march towards the Marine Drive. All students have supported the protest and the faculty also has cooperated with us. We are all in solidarity with the students faced violent actions by the police.”

Satish Gore, Secretary, Maharashtra Pradesh Youth Congress who led SPPU protest, said, “We have organized the chain of protests across the city, it’s our national call. We are going to protest on 17th, 18th and 19th December at several places. At 1.30 pm on 17th December, the youngsters from all over Pune are going to march towards Collector Office, Pune. On 18th, we will be having a torch protest march against the CAA and NRC at SPPU. We will not stop until the Central Government roll-back this divisive law and the ruthlessness towards the entire student community. We’ll not allow Mr. Modi-Shah to tear our nation on religions.”

Several protests are being carried out in Colleges like Fergusson College, Indian Institute of Science Education & Research (IICER), Modern College and so on. A strongly worded ILS Pune statement states,

"We remind the state machinery that under our constitutional framework, the right to peaceful protest is safeguarded as a fundamental right under Part III. It ought not to come as a shock to the ruling establishments in various states where the protests are on-going that a vote is not a solemn declaration of irrevocable acceptance for all times to come. A vote is not a bargain for silence without dissent."