Will India lose its rare Dolphins in silence?

Only four out of the 88 known species of dolphins are freshwater, and India is home to one of them.

Only four out of the 88 known species of dolphins are freshwater, and India is home to one of them. The Gangetic Dolphins, locally known as Susu, have been found in River Ganga and its tributaries. The Turtle Survival Alliance (TSA) recently rescued its 26th Gangetic Dolphin from a canal system of Ganga in the last 10 years. Experts have called for greater patrolling and research around barrages of river Ganga, Brahmaputra and their tributaries in order to boost the dolphin rescue programme.

Unplanned development and increasing anthropogenic pressures have made this home a deathtrap for the magnificent creature, which is also India’s national aquatic animal. The constant strandings in the multiple barrages over the Ganga-Brahmaputra-Karnaphuli river systems and the ambitious Inland Waterways project have threatened the existence of this endangered species.

“There are many barrages on river Ganga as well as its tributaries along the India-Nepal border, in Uttar Pradesh, West Bengal, etc. When the river water is diverted, especially during the monsoon, late monsoon (August-September), is when we believe most animals get flushed in the canal system. This has been identified as a serious issue in dolphin conservation action,” explains wildlife biologist Dr Shailendra Singh of Turtle Survival Alliance (TSA).

On Friday, January 21, a female Gangetic dolphin strayed into the Sagra canal in the Lalganj area of neighbouring Pratapgarh district. After over 30 hrs of preparation and rescue effort and with the support of local fishermen, TSA said that the dolphin was taken out from the canal and rushed to the release site in the Ganga River at Rajbhawan ghat, Kaalakakar.

“In 2013, we started a dolphin awareness programme in UP. Whenever the forest department staff, others found dolphins stuck in the canal system, they alerted us. We thus started rescuing dolphins from canals,” Singh said.

“Earlier, the dolphins could be seen in river Ganga right from the footings of the Himalayas to the Bay of Bengal. They were found all across Ganga and its tributaries. But with several barrages built over the river over the years, their presence is now limited to smaller pockets,” says Dr Sandeep Behera,  Biodiversity consultant of Namami Gange. He is also a committee member of the newly launched Project Dolphin.

When a dolphin gets stranded in a canal system, especially near the barrages, the fluctuating water in the system opens it to the risk of getting isolated from the rest of the river as well as a lack of fish to feed on. Low water levels and low water flow also reduce their chances of survival.

“We always recommend a higher patrolling of the canal system, especially close to barrages and after the monsoon. Rescue depends on what stage of strandedness the animal is in. If they are in the primary canal, stranded recently, they are still healthy. If they are stuck there for two or three months, they are struggling to get out, starving, they are weak. Rescue operation is difficult and risky at such a point. So we need to know sooner than later,” Singh adds.

The more and the sooner the information comes, the better the rescue, he reiterates.

TSA has also put together a smart document, approved by the IUCN, which could be referred to by other states as well. In collaboration with the Uttar Pradesh Forest Department, the organisation has also started a hotline for aquatic animals.

Singh says, “Many people do not know that dolphins exist in their rivers. Sometimes they get killed out of people’s curiosity, sometimes they get caught in nets and sold. We proactively address this and we have very good support from the UP Forest Department. Now we even have the better technical know-how. Whenever we have an opportunity, we go and save the stranded dolphins.”

Few dolphins are still stranded in barrages like Farakka and they started living there. The barrage contains enough water, so they are alright, although isolated. “However, we need to have more information and a coordinated and concentrated approach to look at the situation,” Singh says.

Why are dolphins important?

The Chinese river Dolphin (Baiji) which was found in the Yangtze river in China, was declared extinct in 2006. The baiji's extinction is the first of a large mammal species in 50 years. Today, there are only three rivers across the world where freshwater dolphin species are found - Ganga, Indus and Amazon. 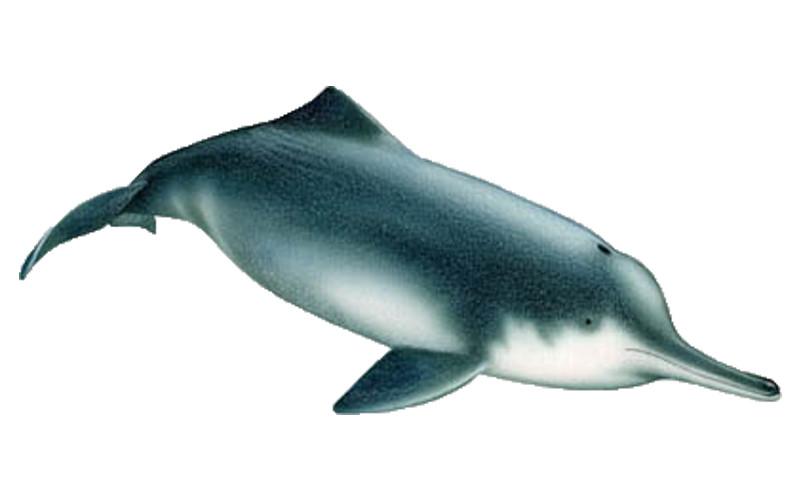 “Aquatic life is an indicator of the health of a river. The presence of these dolphins indicates that this water is fresh,” Behera said.

Dolphins are at the top of the food chain and their dwindling numbers would severely affect the balance of the riverine ecosystem. Large-scale habitat degradation from pollution, hydroelectric and development projects and industrial runoffs threaten the dolphins, in addition to the poaching and accidental deaths caused by stranding and lack of awareness among communities.

Behera adds, “River Ganga began getting polluted in the 80s. Around the same time, we began our research into the habitats, ecology of the Gangetic Dolphins. I would say that I am not concerned about the population of the dolphins, but their distribution. Getting cornered into small pockets affects their breeding. It might also be because of the pollution.”

While the exact count of the Gangetic Dolphins is not available, there are estimated to be around 2,500 to 3,000 dolphins in the Ganga-Brahmaputra-Meghna basin.

“During the COVID pandemic, the dolphin sightings in river Ganga increased. It could be because of the reduced anthropogenic pressures at the time. But since then, we have noticed that as awareness about the dolphins has increased, so have the cases of their accidental deaths at the hand of fishermen and others,” Behera adds.

However, while the sightings have definitely increased, he says that it is not clear if the population has increased.

Apart from Uttar Pradesh, we have seen dolphin rescues in Bihar, dolphin sightings in West Bengal, Assam, etc., disconnected from their habitats. “And this is a problem. Three years ago, at a Convention of Parties (COP) meeting in Ahmedabad, the hydrological systems were identified as a major threat to aquatic life in Ganga, Brahmaputra and Karnaphuli river systems,” Singh said.

Moreover, it is not just the dolphins that are threatened because of getting stranded in the canal systems in the Ganga basin. “Ghariyals (crocodiles), Turtles, several fish species are also impacted. In Uttarakhand, solutions like fish ladders have been brought in to enable fish stranded in dams to migrate in the upstream (or downstream) of the dam.”

TSA has been running the dolphin rescue programme in Uttar Pradesh for the last 10 years. Singh says that the problem existed even before 2013, but there was not much awareness and know-how about the strandings and rescues. Other dolphin states in the country like Bihar and West Bengal might also have a similar problem.

Acknowledging the need to conserve the Gangetic Dolphin, the Central Government announced Project Dolphin on the lines of Project Tiger in India.

“Project Dolphin is a blessing, it is a good initiative. We have understood the threats that the dolphin population faces. Now we have to work very hard to save them,” Behera says.

He also said that efforts made through the Namami Gange programme will help the dolphins as well. “Through the initiative, the release of sewage in Ganga was reduced drastically, new sewage treatment plants were built. Reduced pollution could also have led to the increased sightings of dolphins in recent years,” Behera adds.

Since 2016, when the Central Government announced Inland Waterways on river Ganga, concerns have been raised that the project will threaten the Gangetic Dolphins and their habitat. Experts have warned that dredging activity for inland waterways might disturb the dolphins and other species and cause irreversible damage.

“Waterways in general are a threat to the dolphins. If you go downstream in lower UP and Bihar, the width of the river increases. Because of this, the flow or the depth of the river decreases. I have given my consult that the waterways should not depend on dredging. If you dredge the river bed, the aquatic ecosystem will be affected,” Behera says.

The first phase of the project spanning 1,300 km passes through Uttar Pradesh, Bihar, Jharkhand and West Bengal. Behera suggests that instead of dredging, we should channelise the river in a traditional way - decreasing the width of the river. Naturally, the flow of the river water will increase the depth of the river and then waterways could be developed. 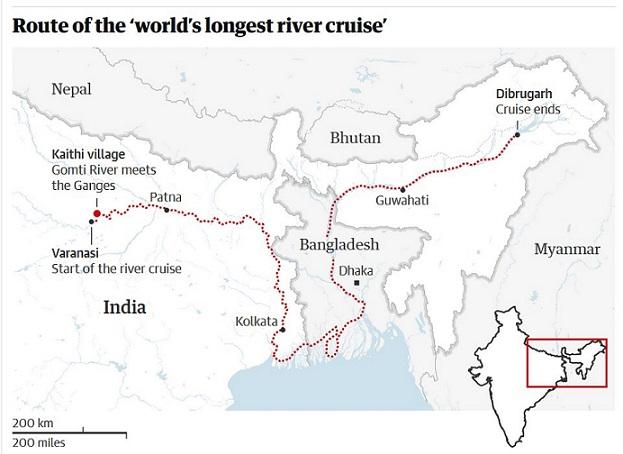 A study conducted by researchers Mayukh Dey, Jagdish Krishnaswamy, Tadamichi Morisaka and Nachiket Kelkar has established that an increase in underwater noise due to motorised vessels resulted in major alterations to acoustic responses, strong masking of echolocation clicks, and high metabolic costs to river dolphins in the Ganga River.

"Vessel noise impacts were the strongest at low water depth in the dry season. Significant increases in vessel traffic during the dry season (March) indicate that dolphins might suffer from the combined impacts of high underwater noise and declining river discharge, and corresponding declines in fish prey availability due to competition with fishing activity," the report stated.

To this, Behera said that the propeller and the sound system of the ships are among the threats to dolphins. “We have regular discussions with the Inland Waterways authorities, wherein they said they were trying to put caps on propellers, so that the dolphins do not get near those. They are also using special acoustic systems to avoid dolphin collisions with the vessels. They are also trying to minimise interaction with dolphins. But more precautions are definitely needed.”

Apart from these, Behera also points towards unchecked fishing activity using nylon nets as a major threat to the Gangetic Dolphins.

“The use of nylon fishing nets has been banned in India. Yet, we see it being used rampantly in Ganga as well. Fishermen need to be guided and monitored to avoid dolphins getting stranded in and dying due to the nylon nets,” Behera adds.

In December 2006, the Baiji dolphins were declared extinct after a thorough survey of the river. Pollution, overfishing, increased traffic in the Yangtze river and at the end, the giant Three Gorges Dam on the river were considered to be the major factors leading to the demise of the species. Reports have shown that the decline in the number of Baiji dolphins was rapid and although efforts were made, it was too late to save the mammals. In order to save the magnificent Gangetic Dolphins from the same fate, there is no alternative to proactive action and sustainable development in river Ganga.