The forests have no threat from us, we protect them: Bhimashankar adivasis protest declaration of ESZ

They fear that eventually, they will lose their homes, livelihoods or entry to the forest.

The forest has no threat from us, in fact, we protect the forests, insist the tribals living in the vicinity of Bhimashankar Wildlife Sanctuary. The fear of losing livelihood and homes has grappled the tribal villagers in 42 villages along the boundaries of Bhimashankar Wildlife Sanctuary as the recent notification by the Union Ministry of Environment, Forest and Climate Change (MoEF&CC) has deemed the area as an Eco-Sensitive Zone (ESZ). While the Ministry notification does not call for the displacement of these villagers or interference in their agricultural activities, people fear that eventually, they will lose their homes and livelihoods with restrictions on entry to the forest.

“People here are scared, what if they are asked to leave their homes, their land in a few years? And we have been given no assurance whatsoever, by anyone from the government, that it won’t happen. Why hasn’t anyone come to explain anything to us?” questioned Shantaram Lohakare, a resident of Terungan village in Ambegaon taluka and a member of Adivasi Vichar Manch, while speaking to Indie Journal.

A total of 42 villages in three districts (Pune, Raigad and Thane) will be under the ESZ. Between 0.05 km to 10 km of the area around the boundaries of the sanctuary will be included in the ESZ. The villagers have been opposing this notification since it was released on August 5th, 2020. Earlier, the draft notification was released in July 2019 for people’s suggestions and objections. However, Lohakare added that since most of the people in the area are less educated or illiterate, and since no awareness regarding the same had been conducted last year as well, no objections were raised.

Lack of Assurance and the Forest Department’s Role

Adding why people’s fears are legitimate, he said, “We have seen what happened to those who were displaced during the construction of Dimbhe Dam here. They lost their lands, and now have to live in tiny homes provided by the government and work as daily wagers. We need a word from the government that we wouldn’t see the same fate.”

Amol Date, Sarpanch of Kushire, Nanwade in Ambegaon taluka stated that the people are afraid that they will no longer be allowed to enter the forest. “Many of us depend on the forest produce for our livelihood. What if we are not allowed to collect those, we have not been told that it won’t happen,” he said.

While the notification has been issued by the Union Ministry, its implementation will be looked after by the Maharashtra Forest Department. Speaking to Indie journal regarding the fear amongst tribals, Jayaram Gowda, Deputy Conservator of Forest Junnar said that the department will soon be conducting a meeting with the representatives of the people in the 42 concerned villages.

“There is no need to fear, as the notification is very clear. Bona Fide needs, livelihoods of the people will not be affected, only the commercial activities will either be regulated or banned. Also, the entire stretches of these 42 villages will not come under the eco-sensitive zone area, and the notification has mentioned the survey numbers of the areas that are going to be included. We will soon conduct a meeting to persuade people and make them aware,” Gowda said.

Interestingly, Indie Journal came across a document containing minutes of a meeting, where the said issue was discussed in December 2019, amongst others, between the Additional Secretary of MoEF&CC and the representatives of the forest departments. Here, it was mentioned that “The representative of the State Government highlighted that people of the adjoining villages had strong objections to the ESZ and urged the State Government to keep zero extent of ESZ.” However, despite this, the villagers have maintained that they had not received any kind of assurance or support from the government. 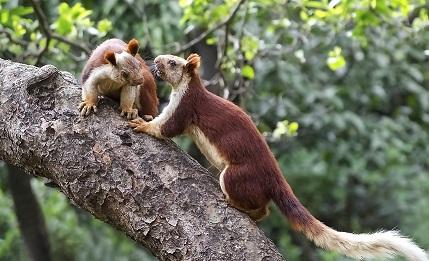 Since the notification has been released, several organisations have submitted proposals to the Union Ministry as well as the Maharashtra Governor and the State Government opposing the notification, asking the administration to make changes to several provisions.

Adivasi Vichar Manch and Birsa Brigade have submitted proposals in this regard to five tehsil offices - Ambegaon, Khed and Junnar in Pune district, Karjat in Raigad district and Murbaad in Thane district. They have demanded that the regulations imposed on the activities of tribals in the forest including animal grazing in forests, collection of forest produce like honey, shikakai, hirda (Myrobalan), dink (edible gum), fish, crabs, etc. must be relaxed. These organisations are also conducting meetings in all the villages creating awareness.

Adivasi Samaj Kruti Samiti, Pune and Kisan Sabha, Maharashtra has also submitted a letter regarding the same to the Maharashtra Governor, where the organisations have pointed out that the declaration of the areas as an eco-sensitive zone would take away the autonomy of the traditional gram panchayats of the tribal communities.

“There are sufficiently strong provisions for the environmental conservation, protection and management in the Forest Rights Act, 2006 and the Provisions of the Panchayats (Extension to the Scheduled Areas) Act, 1996. But the government has been ignoring those provisions deliberately and is being unfair to the tribal communities. Also, while the notification does not permit displacement of the tribal residents, it certainly would lead to an unjust treatment to the tribals living in the area, including snatching of their fundamental rights, physical abuse and mental harassment, from the forest department,” the letter stated.