The period room, or Paalichi Kholi, was installed by the Thane Municipal Corporation in collaboration with Muse Foundation.

India’s first period friendly community toilet was inaugurated at Thane’s Lokmanya Nagar earlier this week. The period room, or Paalichi Kholi, was installed by the Thane Municipal Corporation in collaboration with Muse Foundation last November. The intent behind a specific period room is to give a safe place for the women living in the surrounding settlements and chawls to change and dispose of their sanitary napkins privately and hygienically, said Nehali Jain of Muse Foundation.

“We conducted a survey in 2018 to evaluate the problems and circumstances a woman goes through while menstruating. We found that the women didn’t have hygienic conditions to change the sanitary napkins, and when they did, they would wrap the soiled napkin in a paper or bag and keep it on the window sill of their house because they didn’t have a proper dustbin, or the means to dispose of it safely and privately,” Jain said.

Speaking about the surveying process, Jain said that the women didn’t open up initially when the survey team was following a research-based questionnaire to gather information. “The Google form method didn’t work, so we had to meet each woman individually to get detailed information. We started with questions about their family, housing situation, water supply, and then eventually about periods. By the time we started talking about menstruation, we had earned enough trust of theirs. So, they didn’t hesitate in talking about the problems they faced during menstruation,” Jain further added. 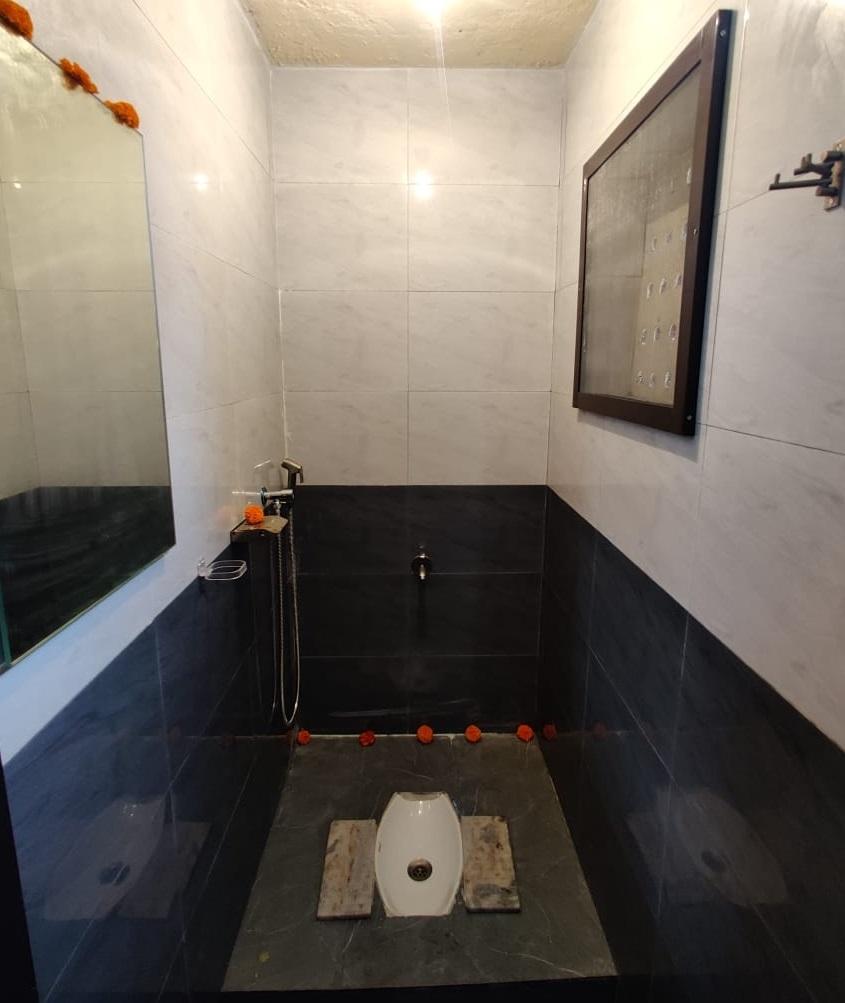 The problems included unsafe changing rooms where either the window, or the door, or the roof were damaged and had cracks and gaps in them. Considering how water is extremely important for any menstruating woman, the women also reported lack of water supply, and how they had to be very cautious with the water they had amidst other household chores that required water. This resulted in unclean toilets too as they were cleaned less frequently. Moreover, disposing the used sanitary napkins was problematic too as there were no dedicated garbage disposals in the women’s toilet. Most women reported that they would keep the used napkins at their doors and windows, and would dispose of them late at night or at dawn at the area’s dump yard.

“We published the data collected from this survey which highlighted the government’s shortcomings. Soon after, the Thane Municipal Corporation contacted us saying they wanted to do something about it. And eventually, we decided to build a period room in the community toilet,” Jain informed. The period room has all the necessary facilities that the women had requested for in the survey. It includes running tap water, jet spray, urinal, paper holder, mirror, soap dispenser, a net frame on the window so that women don’t use the window sill for keeping their used pads there. The toilet also has a recycling dustbin which is hung up on the wall. The project, sponsored by the International Association For Human Values, also includes a large wall painting outside the period room which was painted by Ashutosh Kanade based on a drawing by Hitendra Koyande. This painting aims at invoking joy in people, thus promoting sanitation.

“Since the inauguration was planned on a short notice, we couldn’t organise a proper workshop to educate the women elaborately on how to use the facilities in the period room. However, we briefed them about using the toilet during the inauguration ceremony, and are planning a workshop for the same soon,” Jain stated. The toilet is now open for the women in surrounding areas to use, and the Muse Foundation will be monitoring the response to work on any improvements that the women report.