The concerned area of land will cause deforestation of more than 10,000 trees in the Thano range of Uttarakhand.

Yet another ‘Chipko movement’ is brewing in Uttarakhand's Dehradun, as the state government has sought approval to transfer 243 acres of forest land to the Airport Authority of India (AAI) for the expansion of Dehradun’s main airport. The concerned area of land will cause deforestation of more than 10,000 trees in the Thano range of Uttarakhand. This area also lies within a 10 km radius of the Rajaji National Park Eco-Sensitive Zone. Environmentalists and ecology experts believe that this move will affect the wildlife and biodiversity in the area.

The picturesque Thano range, surrounded by Mussoorie hills, is 25kms away from Dehradun and 30kms away from Rishikesh. Besides being the only forest link between the Shivalik and Himalaya ranges in the valley, Thano also serves as an elephant corridor, with elephants being a common sight around here. The EIA study claims that no fauna was found in this region. However, according to the Youth For Climate India, the area is home to 104 bird species. Wild animals like leopards, porcupines, owls, deer, eagle cats, wildcats, antlers, wild boars, hares, snakes, monkeys, and rare species like pangolins and monitor lizards are found within this area.

Moreover, according to TOI, Thano is home to a total of 9,745 trees, including species like Khair (3405), Sheesham(2135), Sagon(185), and Gulmohar (120), along with 25 other species of trees. The Thano range also forests the moist Shiwalik Sal trees and moist Bhabar Doon Sal. Environmentalists have stated that Sal forests play a vital role in holding slippery hills of the Shivalik range and are a perfect habitat for wildlife species like leopards, tigers, and elephants. Loss of these trees will lead to soil erosion, risks of landslides, and loss of wildlife. 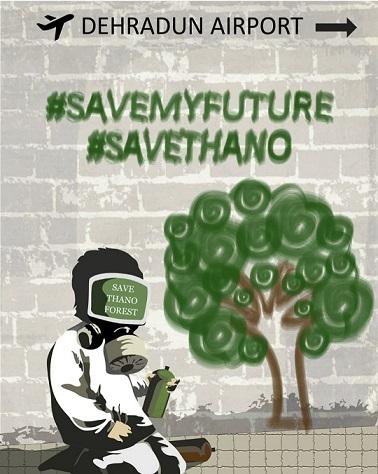 The request to approve this land for Jolly Grant Airport’s expansion was justified saying international flights are likely to increase following the pandemic. Additionally, Uttarakhand also shares a border with China, thus giving it strategic importance. The current runway length of the airport is 2140m, and after the expansion, the runway shall become 2765m long. After the completion of phase 1, the airport shall have 36 check-in counters, four aerobridges, an in-line baggage screening facility, and self-check-in kiosks. While the budget for this project is parked at Rs.353 crores, the project is expected to finish by October 2021.

When the airport received the grant for its first expansion in 2018, Chief Secretary Om Prakash had said then, “Uttarakhand is turning out to be a major centre for yoga, wellness, adventure sports, and tourism. The number of passengers at Dehradun airport has gone up to 10 lakh, and the state authorities think that the number will double in the next three to four years.”

Several environmental activists have pointed out that with the loss of wildlife and mountainous green cover, Dehradun may not remain the tourist spot it is widely known for. Some even apprehended that the picturesque city might succumb to the metropolitan lifestyle and landscape for compromising with the environment.

Environmentalist Sneha Diman says, “Environment cannot take a backseat for development. Though the area has strategic importance, it cannot justify the loss of ecology here. Have they prepared an environmental impact report, or assessed the consequences of such a huge loss? The elephants are a common sight in Thano and I have not yet heard anything about how the authorities plan to provide a green cover for these animals.”

In July 2020, an elephant had died after being hit by a train near the Thano range. “At night, elephants keep passing from here. A mother and her two-year-old baby elephant were crossing from this area when a train hit the baby and it fell into the nullah. The body was found inside a 10-feet deep gorge near the railway crossing,” a forest official had informed then.

Diman further stated that the expansion of land needs to stop because not only are we affecting sustainability, but we are also indirectly allowing animals into human civilization – something that neither we nor the animals are prepared for. 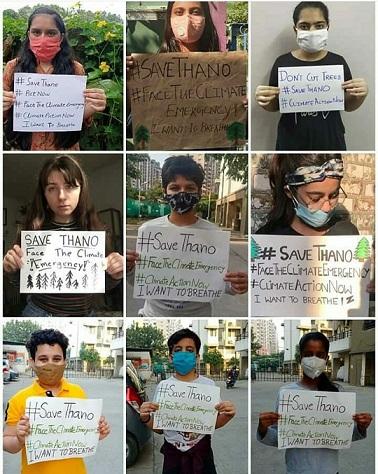 Another ecological expert, Gaurav Patwal, pointed out that the land concerned with this airport-expansion project falls under the seismic zone IV, which is a high-risk zone. “When the trees will be cut down, it will disturb the layers of soil beneath, making the land more prone to seismic vibrations. Soil erosion will increase too, and it will be dangerous during monsoons. I am surprised that this project was even thought of in the first place,” he said.

Ecologists are worrying about irreparable damages this move will elicit - the increase in temperature, extinction of rare species, and depletion of groundwater level that agriculture in the surrounding areas depends on. But this is not the first instance of environmental apathy at the hands of Uttarakhand authorities. The National Wildlife Board (NWB), in February, gave a green signal to the controversial 11.5km Laldhang-Chillarkhal road project, 4.5 of which passes through the Chamaria vend to Siggadi Sot between the Corbett Tiger reserve and Rajaji Tiger reserve. The question of preserving green cover and tigers was raised then too, but the project anyway started in June.

Moreover, the construction of the Delhi-Dehradun Expressway, which aimed at reducing travel time between Delhi and Dehradun to 2.5 hours, resulted in the cutting and deforestation of over 2,500 trees in Uttarakhand, which also included a British-era Sal forest.

Ironically, the state recently built an urban forest - Anand Van, in the Jhajhra forest range in Dehradun to reduce severe levels of air pollution. The state plans to build more urban forests in Rishikesh and Haridwar.

Following the Aarey protests in Maharashtra to save the Aarey forest from being cut down, environmental activists have organized a Chipko movement and Twitter storm on October 18th to save Thano. Additionally, the first pan-India green political party – India Green Party (IGP) has written a petition to the Prime Minister, who is also the chairman of the National Wildlife Board. In the letter written by Suresh Nautiyal, President of IGP, the party requests the PM to abandon the project in question and not allow the expansion of the airport at the cost of 10,000 trees. The party also suggests that the only solution is to let the airport be as it is without harming the surrounding ecosystems since “our future generations need a good environment to breathe freely without masks.”

In this letter, the IGP also underscored that the NWB has not met for a long period and should be democratized by having wildlife experts who spent decades saving wildlife to be on the board, instead of limiting the board seats to retired forest officers only. “As a result, the primary function of the NWB, to promote the conservation and development of wildlife and forests, has not been achieved properly,” the letter states further.

Speaking about the role of NWB, Diman says, “The chairman of the board is the Prime Minister, and the vice-chairman is the Minister of Environment. In the last 6 years, the board has not met even once with all its members in attendance. However, between 2015-16 and 2019-20, the standing committee met 23 times to give a green signal to several projects out of which, 680 projects were granted wildlife clearance. Considering that most of these areas were in protected areas, it is appalling that the board never met in complete attendance. One can wonder if the environmental assessment was carried out unbiasedly or not."

By sanctioning the project, the NWB will elicit even more questions about the authenticity of its mandate of promoting conservation of wildlife and the development of forests.

No contact with more than 100 villages in flooded Gadchiroli