The Housing Discrimination Project has collected information on the discriminatory practices against Muslims.

Most of India’s 'diverse and cosmopolitan' localities continue to discriminate against the Muslim communities by refusing to rent them living spaces, says empirical research that was launched three years ago and published earlier this week. The Housing Discrimination Project has collected information on the discriminatory practices against Muslims by society and how it leads to segregation which further widens the gap between communities. Metropolitan cities like Mumbai and Delhi were largely used to collect information for this report. However, a similar milieu can be seen across the nation where the Muslim population has been subtly kept apart from the mainstream population.

Zainab Akhter, a Pune-based social activist working for the rights of minorities narrows down the issue to Pune saying, “The segregation and bigotry is so common and normalised that it is hidden in plain sight. It exists in both, rural and urban areas. If you look at Pune, the Muslim population was scattered throughout the city in Bhavani Peth, Deccan, Yerawada, Khadki and Pashan."

She continues, "But after the 1992 Bombay riots and 2002 Gujarat riots, Pune saw an influx of the Muslim population which settled on the outskirts, then formed mohallas and can now be largely seen in areas like Kondhwa, Lullanagar, NIBM, Hadapsar and Camp. The main Peth areas of Pune do not comprise primary residence for the Muslim community. It still has its Brahmin culture dominance that refuses to let other communities blend in.” She further states that there is a conscious decision from the Muslim community and the non-Muslim community to stick to these areas as it “guarantees security and avoids direct discrimination”.

The impact of this discrimination has left a mark on several tenants, to a point that caused them unwarranted discomfort. Some were subjected to intruding monitoring by their landlords, while others were straight away rejected as tenants. Speaking about one such incident, Asif Shaikh says, “When I called up the number that I saw on a Facebook ad for apartments on rent, the broker gave me all the relevant information. At the end, he asked me, ‘Tum momedian toh nahi ho na?’ (You aren’t a Muslim, are you?) I hadn’t told him my name until this point. When I said that I am, he told me he cannot show me the apartment we were discussing. He said he would call me when he finds another place, but he never did.”

Tarun Pagariya, a broker from Pune, states he has been informed by several owners to not entertain any potential tenant that belongs to the Muslim community. “I don’t hate Muslims, but most people have a problem with them. Some people don’t want them as tenants, while some ask me to ensure there won’t be any problem in the future. So, I am forced to carry a thorough background check on them. It has become a serious issue after this CAA protest too.”

Speaking about the conduct of such house owners towards Muslim tenants, Akhter says that the tenants are often subjected to unfair treatment. “There are instances of landlords wanting to charge the tenants for unnecessary services like cleaning the apartment and making a few repairs. It is the landlord’s duty to ensure that the living space has all basic amenities in a hygienic condition. Some even hike the maintenance charges. They do it to either hassle the tenants or to make them leave without letting their bigotry take the blame.”

Ayub Mohammad recalls such an incident when he was staying on rent in Nana Peth with two other Muslim friends of his. “They monitored us. They wanted to know when we came home, when we left for work, who came to visit us, what food are we cooking, etc. We were treated like a bunch of criminals which really affected my sense of self-identity for a while. We left the flat soon after,” he says. 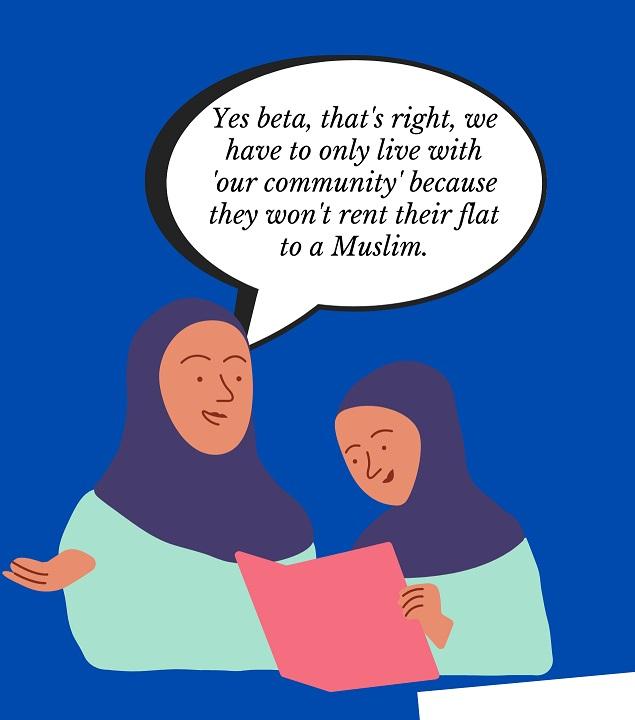 Last week, Union Home Minister Amit Shah stated that the controversial Citizenship Amendment Act would be implemented after the COVID-19 vaccination drives are completed. "The statement received ample positive response and support from a large section of the society, which is a testimony to the growing hostility towards the minorities," says Akhter.

She further added that her team’s ground research revealed that tenants were a bit wary of taking in Muslim tenants for several reasons, but the most common one was CAA protests. A lady in her 50s from Erandwane was seeking tenants for her vacant flat, and she told Akhter’s team, “The CAA protests showed what these people are really capable of and I don’t want any of that ruckus on my property.” The ground research also showed that not only property owners, but even non-Muslim tenants tend to stay away from the Muslim localities of Pune and potential Muslim flatmates.

Following the aggravating apathy towards her community, Uzma Khan, a manager at a corporate facility in Pune has decided to limit herself to a Muslim locality in the city after moving here from Delhi.

“I feel much safer to live in a Muslim-dominated area. Two of my friends were harassed on communal grounds when I was living in Delhi, and I don’t want to be another victim. I decided to come to Pune soon after. When I met the broker after selecting a few places online, he subtly told me how I should live with 'my community'. It made me uncomfortable. I was also disappointed that Pune too has succumbed to this communal fire that has shook the country in recent times. So, I decided to live in my own community even if it is 12 km away from my workplace. I have a secure environment that way where people don’t judge me based on my religion.”

Even after the discrimination that most Muslims are subjected to, Zainab says that Pune hasn’t lost itself to communal division yet. “If you continue to treat us like minorities and stay in a box, the discrimination will never cease. We will always be 'mutton khaanewale momedians', but not 'kheer baatnewale padosi.' (We will always be meat eating Muslims, but not the neighbours who share kheer). There’s a majority of Pune who doesn’t discriminate against the Muslims, but the small section that does this, that small section has a much larger impact than we think. Because they are not attacking an individual for a religion. They are attacking a culture, a society, an identity and an upbringing without seeing the individual as just another human.”