The investigation ‘India Chronicles’ focuses on a disinformation network in India’s favour.

India has primarily designed a network to “discredit Pakistan internationally” and influence the decision-making process at the UN Human Rights Council (UNHRC) and the European Parliament, according to a report by BBC News. India did this with the help of 750 media outlets across the world, they stated.

BBC has cited the report published by EU DisinfoLab, which had earlier exposed the ‘European Chronicles’ scam. According to this report, a vast network of fake media outlets, think tanks and NGOs serving Indian interests was uncovered by them in 2019 too, following which the newspaper EP Today was shut down. However, this network was active even after being exposed. When those at EU DisinfoLab noticed that the UNHRC was being abused by a network of NGOs that served Indian interests, they reopened the investigation and renamed it as ‘Indian Chronicles’.

The investigation revealed that those involved in Indian Chronicles were using dead people’s names to attend events five years after their deaths – for example, Prof. Louis Sohn died in 2006, yet he “appeared” at several events that were organised by fake NGOs after his death. The people involved in this operation also used dead media, dead think tanks and dead NGOs. They hijacked names of others and tried to impersonate regular media and press agencies like EU Observer, The Economist, and Voice of America. Moreover, they invented dozens of fake journalists’ identities and used fake media that would quote and republish each other to show authenticity and trustworthy sources. They even used letterheads of the European Parliament and registered websites under avatars with fake numbers. And besides providing fake addresses to the United Nations, they would also organise multi-stakeholder events where every guest speaker was tied to them already.

According to BBC, last year DisinfoLab had uncovered a network of 265 fake media outlets across 65 countries and had traced them back to a Delhi-based Indian Company - the Srivastava Group (SG). A young man named Ankit Srivastava appears to be at the centre of this global operation with more than 400 domain names purchased through his private e-mail address or the e-mail addresses belonging to his organisations.  But this year’s report reveals that the operation run by SG is spread over at least 116 countries and has targeted the EU Parliament and the UN. It raises questions about how much these two institutions knew about the SG operation, and if they took any steps to counter the activities especially after last year’s report. 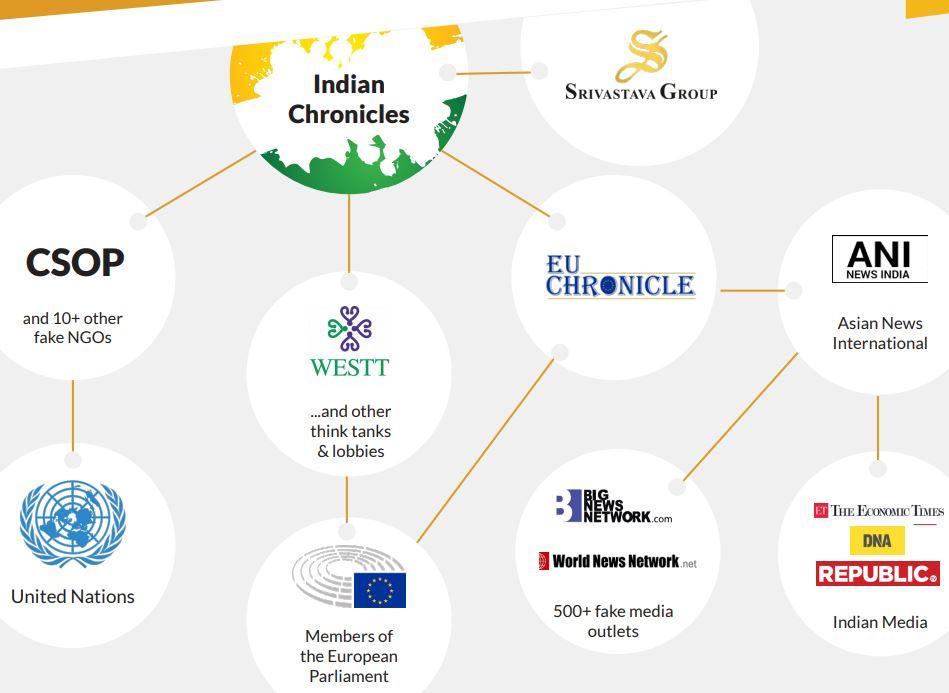 The same BBC report quotes Alexandre Alaphilippe (one of the investigators at the DisinfoLab) saying that the EU DisinfoLab researchers had never seen such coordination between different stakeholders to spread disinformation. "During the last 15 years, and even after being exposed last year, the fact that this network managed to operate so effectively shows the sophistication and the drive of the actors behind Indian Chronicles. You need more than a few computers to plan and sustain such an action," he said. Another disinformation expert Ben Nimmo was quoted saying that this network of disinformation was one of the most persistent and complex operations he had seen.

Indian news media largely depends on news provided by ANI, which was established in 1971, and is known as South Asia’s leading multimedia news agency. In the aforementioned investigation report, ANI has been named as the primary news agency - which is also closely related to SG - for repackaging and boosting pro-India content. EU DisinfoLab found at least 13 instances of ANI re-publishing mostly anti-Pakistan and sometimes anti-China op-eds by Members of the European Parliament (MEPs), originally published on EU Chronicle, one of the fake news sites linked to SG. Besides being referred to by several mainstream Indian media outlets, the news content from ANI was also reproduced on more than 500 fake websites across 95 countries, the researchers found.

In October 2019, Twitterati witnessed the controversy surrounding Madi Sharma, an Indian origin person based in Germany, who arranged a trip of 23 members of the European Parliament to Kashmir, after the abrogation of Article 370. Interestingly, members of the Indian Opposition weren’t allowed to visit Kashmir yet. What sparked the controversy was the fact that this visit was neither initiated by the European Government nor the parliamentarians were invited by the government.

The same Madi Sharma has been named as one of the key actors in the ‘Indian Chronicles’ too. According to the investigation, Members of European Parliament (MEPs) who were taken on international trips would write “exclusive” op-eds for fake outlets like EU Chronicles, which would then be amplified by ANI. One of the MEPs, Theirry Mariani, a member of France’s far-right National Rally, wrote two articles for EU Chronicle and was also a part of the EU members team that visited Kashmir last year. According to BBC, Mariani was quoted saying, “If the Indian Government is behind the newspaper [EU Chronicle], it is not my problem. I sign what I want and I feel, it is my opinion. I have connections in [India's governing] Bharatiya Janata Party (BJP) and I support the government of [Narendra] Modi.”

Gary Machado, Managing Director of EU DisinfoLab, said he thought the muted reaction to the revelation of the disinformation network was partly because it was "clearly managed by Indian stakeholders". "Imagine if the same operation was run by China or Russia. How do you think the world would have reacted? Probably with international outrage, leading to public inquiries and probably sanctions," he told the BBC.

The Indian Foreign Ministry has refuted the claims in the report, especially after it was cited by the Pakistani authorities. "In fact, if you are looking at disinformation, the best example is the country next door which is circulating fictional and fabricated dossiers and purveys a regular stream of fake news," Ministry of External Affairs (MEA) Anurag Srivastava said in a briefing.