Speaker Rahul Narvekar has written to the DGP asking to take appropriate action to prevent any instances of cow slaughter on Bakri Eid.

Maharashtra Assembly Speaker Rahul Narvekar has written to the Director-General of Police asking to take appropriate action to prevent any instances of ‘Govansh Hatya’ (cow slaughter) taking place in the state on Bakri Eid on Sunday. Interestingly, his letter has referred to another letter of concern in this regard by the Vishwa Hindu Parishad (VHP), a controversial Hindu nationalist organisation.

When enquired about the same, the Speaker, who is a BJP leader and was recently elected as Speaker after rebel Shiv Sena leader Eknath Shinde formed government in the state with BJP on the basis of Hindutva, told Indie Journal that the Speaker Office had received a representation in this regard that he ‘merely forwarded to the concerned agency as per the norm’ and that he will have to find out more about the letter in question.

The letter with Narvekar’s signature on it, now circulating on social media, states that the Maharashtra Goshala of VHP Konkan region had written to the Speaker demanding the cow slaughter be stopped ahead of Bakri Eid.

“While cattle slaughter is banned in the state, there is a possibility that cows might be slaughtered in large numbers on Sunday, July 10, 2022, on the occasion of Bakri Eid,” the letter signed by Narvekar reads. 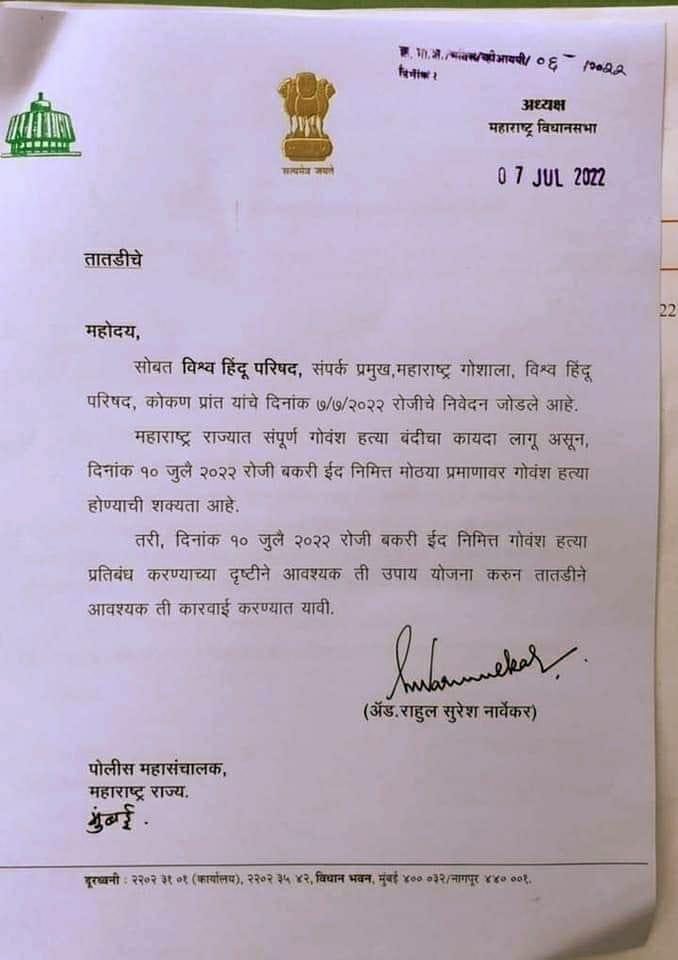 He further asks the DGP in the letter to ensure that necessary action is taken to prevent such slaughter urgently. “All we have asked is to take appropriate action to maintain law and order. We have not said anything unusual,” Narvekar said.

When asked about the reference to VHP, he said that it must be because they must have sent the letter to us. “I am out of the station at the moment. Let me find out and get to the bottom of it,” he added.

Cattle slaughter has been banned in Maharashtra since 2015, under the Maharashtra Animal Preservation (Amendment) Act. The ban was imposed by the Devendra Fadnavis-led BJP-Shiv Sena government that had come to power in the state in 2014.

“I have been wondering if the letter has been written by him since I came across it. Because not only does this befall the ethics and codes of conduct, but also Maharashtra’s culture. He can ask people to follow the law as the Speaker. But it’s unfortunate if the Speaker has issued a notification with reference to a letter from VHP,” AIMIM MP Imtiyaz Jaleel said.

Just two days ago, Karnataka Animal Husbandry Minister Prabhu B Chavan reminded people of the state’s Cattle Slaughter Prevention and Protection Act, 2020 and Cow Slaughter Prohibition Act, appealing not to sacrifice cattle for the Bakri Eid festival while warning of stern action against the offenders.

The Basavraj Bommai-led Karnataka government has asked the Animal Husbandry Department and police to keep a strict vigil on the illegal movement of cows and beef to/from outside the state.