It's not just about Europe!

The fight against climate change needs to be fought beyond regional barriers.

The heatwave that has grasped almost the entirety of Europe this summer has grabbed the attention of everyone across the globe. The increased instances of such extreme weather events in Europe, US, the developed world, have paced up the discussions around climate change and have been deemed an eye opener. Such instances have begun in the developing world a long time ago, much before climate change took a front seat in the global discourse.

Unprecedented temperatures have been recorded in different parts of Europe this year, there is weather generally known to remain on the cooler side for the most part of the year. The heatwave that began from June-end, July-first week owing to hot winds flowing from northern Africa, has continued and intensified throughout the month. Wildfires that began in France, Spain, Portugal earlier this month have now spread to parts of Britain, Italy, Greece, Turkiye, Slovenia as well. Firefighter accounts narrate that the fires, that have led to the evacuation of thousands across the continent, have been difficult to control. The ever-rising temperature has only added fuel to the fire.

The European nations are not prepared to manage such levels of heat, the media has been reporting. Data shows that just around 20 percent of European homes have air-conditioning, considering that the geographical location of the continent has helped it maintain cooler temperatures. It’s not that Europe has not seen heatwaves before. The continent has had deadly heatwaves before. However, the intensity and frequencies of such instances has risen, say scientists. In fact, it has been said that the heatwave this year could be the worst heatwave Europe has seen in 200 years.

The upper-level low-pressure area built over Portugal due to the hot air from northern Africa is said to be one of the major reasons behind increasing temperatures in Europe this month. The temperature rise has also been attributed to the warming of the Arctic Sea. 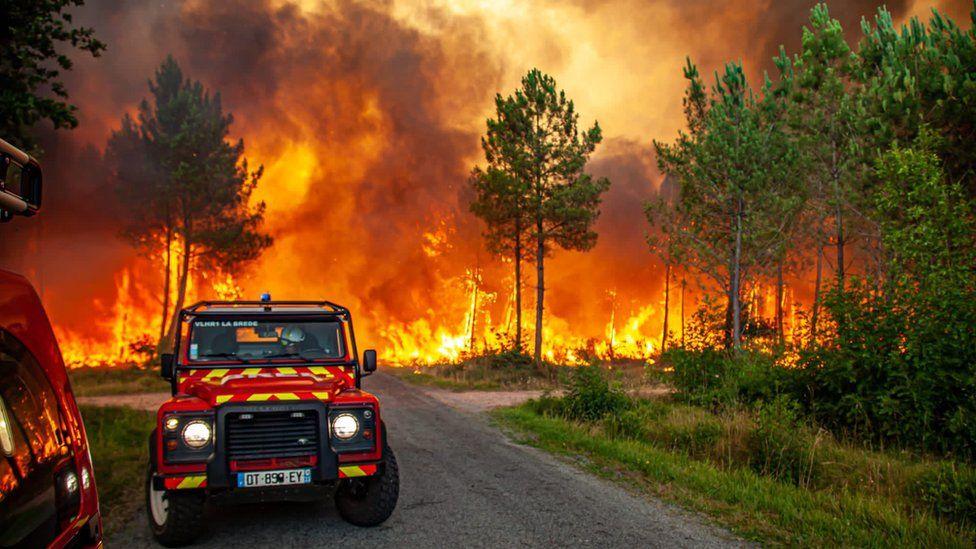 However, as much as the local factors are at play in causing the heatwaves, their intensification has definitely been a result of climate change. Scientists have said that the frequency and intensity of heatwaves in Europe have been increasing faster than any other part of the world. The concentration of CO2 has increased by 48 percent between 1750 to 2020. While the heatwave that has lasted for over 20 years has triggered discussion around the climate crisis, it cannot be done without giving due consideration to the factors that have brought the world at the doorstep of the emergency, that some meteorologists in Europe at the moment are calling “apocalypse”.

Meanwhile, while most of these countries have made promises of zero carbon emissions targets at the COP26 held in Glasgow, Scotland in October last year, the Ukraine-Russia war has threatened the continuity of natural gas supply from Russia to Europe. This could lead to the countries preparing to depend more on coal, which could be further disastrous to the already dangerous climate statistics.

As per a report by POLITICO, Europe’s governments are simply failing to plan adequately for a hotter planet. It says that the European Union (EU) asks every member country to report how much they spend on 'climate adaptation' in total and by sector. As per POLITICO reveals that its analysis of this reporting shows that 20 out of 27 countries either provide limited or no detail on their spending plans.

The EU's struggle to adapt to this emergency shows in other examples as well. The countries do not have enough firefighter aircrafts to deal with the raging fires that have started to become a common occurrence in the countries over the last decade. The EU is in talks with manufacturers to buy enough planes.

Many parts of the world are experiencing weather & climate extremes linked to human-induced #ClimateChange, including the current #heatwave in Europe 🌡

It's vital we work together to keep 1.5C alive and avoid extreme weather events becoming the new normal.#GlasgowClimatePact pic.twitter.com/gu0QFoiWG0

It’s the common man that gets affected adversely as weather systems reveal unprecedented extremities. At least 1,700 deaths have been reported in Portugal and Spain alone since the heatwave began, as per the World Health Organisation (WHO). The frontline workers, outdoor workers in Europe are facing the brunt of the sweltering heat. While countries are trying to maintain a business-as-usual approach, extreme heat puts those labouring outdoors in serious danger, even fatal danger.

In Spain, a 60-year-old street cleaner died after collapsing due to heatstroke while cleaning a pavement in Madrid. A total of at least three people in Madrid have been reported to have died while working outdoors last week. Trade unions have now asked the European Commission to impose a maximum temperature limit on outdoor work. Only a few member countries have legislation limiting working hours in excessive heat. It’s a shame that while climate change has already been posed as a reality, the adaptation measures still need to be pushed by those whom it affects the most.

The attitude reflects how the developed world looks at climate change and its adaptation and mitigation in the world. The EU has set legally binding targets to cut carbon emissions by 2030 and 2050. As per the Paris Agreement rulebook, the EU has agreed to keep the average temperature rise below 2 degrees Celsius, as close as possible to 1.5 degrees Celsius. However, one of the most important parts of the discussions at COP26, that of providing climate finance to developing and vulnerable countries, is still in the backseat.

Climate Change 2022: Impacts, Adaptation and Vulnerability report by the United Nations Intergovernmental Panel on Climate Change (IPCC) said that domestic funding and international support from developed countries are inadequate. Limited financial resources hinder climate change adaptation. Therefore it is necessary for the world to discuss the drought in the horn of Africa stretching from northern Kenya to Somalia and the swaths of Ethiopia, as much as we discuss the heatwave in Europe, even more so. Hardly anyone is talking about the heatwave in Morocco in northern Africa, that led to wildfires there in the beginning of this month.

Climate change is creating bitter new realities globally. The Horn of Africa is bearing the biggest brunt. For the first time since records began, there's a chance that a fifth rain season will fail in much of the area. It's immoral & unethical that we keep quiet about this. A 🧵 pic.twitter.com/7xS2j1iNQP

Several parts of the northern hemisphere have faced extreme heatwaves this year alone. In March and April, Pakistan and India had unprecedented heatwaves that affected lakhs of people. Japan saw its worst heatwave ever recorded this year at the end of June, amid a power shortage that hindered heat management. The Horn of Africa drought has threatened to leave millions starving by the end of this year. Small island nations in the Pacific continue to face the risk of inundation as sea levels rise. The Arctic continues to get warmer three times faster than the rest of the earth.

While the EU's emission goals are commendable, climate change assistance and reparations are the most mitigation measures for the continent that has started to experience the full impact of the damage to the environment. Without those, the emission-control targets mean nothing. Blaming the third world for climate change in a world where the average temperature has already risen 1.2 degrees Celsius above pre-industrial levels will not help.

Last year, floods ravaged western Europe and parts of eastern Europe. Heatwaves have been predicted to get even more frequent in the coming years, almost to the point of becoming “normal”. For mitigation to be possible, Europe needs to strategise beyond the barriers of regional sovereignties. It’s high time that the financial assistance of upto 100 billion dollars a year and the support promised by the rich countries to the poor need to be delivered.