Marine heatwaves are periods of extremely high temperatures in the ocean.

While several Indian states suffered the impact of climate change and extreme weather events during the monsoon last year, a recent study has also added marine heatwave as another major phenomenon that could have an impact on the monsoon system in India. A study by the researchers at the Indian Institute of Tropical Meteorology (IITM) has shown that the instances of marine heatwaves are increasing in the Indian Ocean, and these heatwaves are having an impact on the Indian monsoon as well. In the study published in the journal JGR Oceans, the researchers report a significant increase in marine heatwaves, aided by rapid warming in the Indian Ocean and strong El Niños.

The world spoke extensively of heatwaves last year. Worldover, several countries saw an unprecedented rise in temperatures, which resulted in wildfires, evacuations, deaths, flash floods, etc. However, while the term heatwave has become a fairly common part of our discourse, we don't see much discussion or research around marine heatwaves.

“It has been only a few years since the term marine heatwaves has been coined and used in scientific literature. Now the IPCC also identifies it as a major extreme event occurring in the oceans. So far there have been studies in the other major basin, but in the Tropical Indian Ocean, there has been no comprehensive study trying to understand the evolution of these marine heatwaves and their impact. This is what we have done in our research,” climate scientist Roxy Mathew Koll who led the study said.

What are marine heatwaves?

The last marine heatwave studied by Koll and his team in April 2020 stayed for almost one month and had an intensity of three degrees Celsius. The research shows that the marine heatwaves can affect corals, marine fisheries. “These events cause habitat destruction due to coral bleaching, seagrass destruction, and loss of kelp forests, affecting the fisheries sector adversely. An underwater survey showed that 85 percent of the corals in the Gulf of Mannar near the Tamil Nadu coast got bleached after the marine heatwave in May 2020. Though recent studies have reported their occurrence and impacts in the global oceans, they are least understood in the tropical Indian Ocean,” the research paper states. 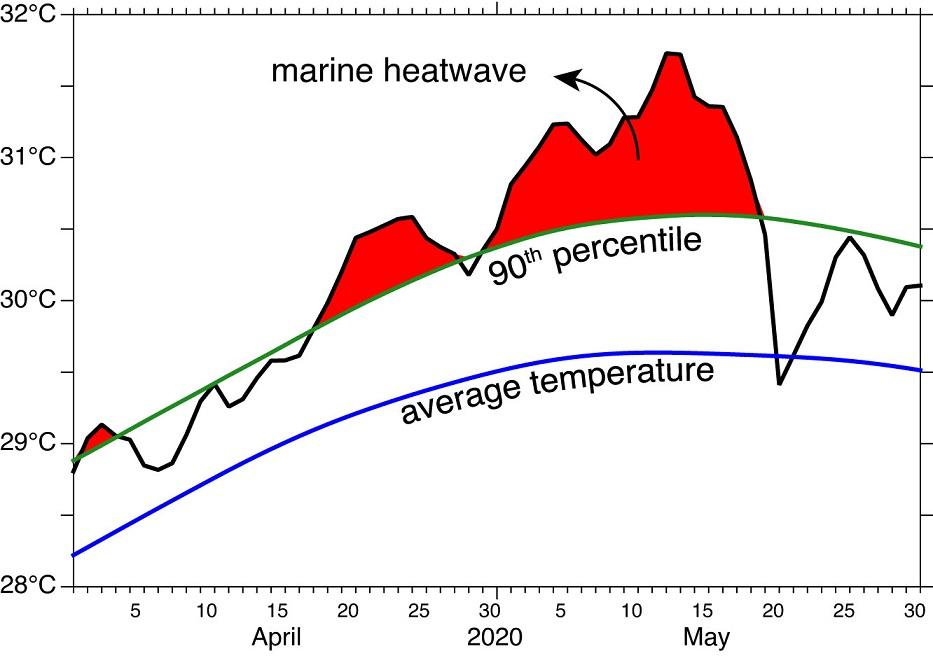 Koll adds, “In the last decade or so, the number of heatwaves and their intensity has started rising. In the last couple of years, we have started noticing marine heatwaves in the tropical Indian Ocean close to the Indian subcontinent.”

How are marine heatwaves affecting the monsoon?

This study, for the first time, has demonstrated a close link between marine heatwaves and atmospheric circulation and rainfall. The researchers say that when the marine heatwave occurs, they change the way the monsoon winds act.

“When you have more heating in the western Indian Ocean, the monsoon winds, instead of going to land, convert towards the western Indian Ocean. The moisture is not carried from the ocean to the land. That is how the rainfall gets reduced over the land. The rain instead falls over the ocean. In a similar manner, when there is heating over the Bay of Bengal, that weakens part of the monsoon but strengthens another part of the monsoon band. So it causes a reduction in the rains over Central India, but enhancement of rainfall over South India,” Koll says.

The last few years have seen an increase in the frequency of cyclonic storms affecting India’s west coast, which has been attributed to the rise in the surface temperature of the Arabian Sea. Koll underlines that in the coming years, cyclones could be a potential impact of the marine heatwaves.

“We have seen that marine heatwaves tend to trigger or initiate cyclones also, but it has not been explored in the study. But that is a potential impact, so is the occurrence of extreme weather events during monsoon,” he says.

Do we understand marine heatwaves well?

The study mentions that these heatwaves used to be rare in the Tropical Indian Ocean, but now they have become an annual affair. During 1982–2018, the western Indian Ocean had a total of 66 events while the Bay of Bengal had 94 events. The researcher says we have seen a four-fold increase in the western Indian Ocean and a two-three-fold increase in the Bay of Bengal. These are the two regions where we see marine heatwaves occurring mostly.

The increasing frequency of extreme weather events has made it necessary to enhance our ocean observational arrays to monitor these events accurately. Koll says if we can monitor the marine heatwaves very well, we can probably predict monsoon changes better. But we don’t have enough on-site observations using equipment like buoys.

“We need more buoys at different locations, especially the key locations where marine heatwaves are occurring. But in these key locations, there are gaps in the number of buoys. Thus there are no sustained observations. We need those instruments out there. If we can monitor these heatwaves and incorporate them in our weather models, then we will be able to predict the monsoon variables in a better way,” Koll concluded.