Approaching a changed 'first day of school', only 20% students in state have digital learning access

June 15th will not be the first day of school for many students across the state.

Every morning, since the last week of March, when Maharashtra Government instructed the schools across the state to shut down, Dattatray Bhoyar, Principal of a Matoshri Chandrabhaga Chinnavar Vidyalay in Akoli village of Yavatmal district, has been thinking of ways to reach out to his students.

“There are 244 students in our school. Out of those, only around 130 have access to smartphones. There is no way to impart education to the rest until the schools reopen,” Bhoyar said as he worried about the future of his students.

While many schools in the state are set to start the new academic year online due to Coronavirus lockdown, this year, June 15th will not be the first day of school for many students across the state.

As per a survey conducted by Active Teachers Forum, an informal group of teachers across the state, out of the 1 lakh 48 thousand students surveyed, hardly 20 per cent had access to smartphones, informed Kishor Kathole, a teacher at a Zilla Parishad (ZP) School in Moj village in Palghar district.

Kathole added, “Even at my school, out of the 175 students studying in classes I to VIII, hardly 25-30 students have smartphones at their homes. Smartphones owned by many families are of older models, and cannot support apps required for e-learning. Internet connectivity remains to be a problem, even if they recharge for internet packs.”

The damage caused by Cyclone Nisarga has also added to these difficulties of the students residing in the affected areas.

“People in several tribal villages here do not own smartphones, forget any other gadgets, required to access online education. Those who have gadgets might not have internet connectivity, and further, there is no electricity in many villages here because of the heavy rainfall caused by the cyclone. There is no way these kids can start school any time soon in this condition,” tribal activist Nilesh Sable, who is the resident of Rajewadi village in Pune district’s Ambegaon taluka said.

At the ZP School in Iralad village in Parbhani district, Vice-Principal Umakant Hadule has been holding online classes for the students of higher classes on WhatsApp.

“Every evening, for about an hour, we teach and discuss on chat rooms and video calls to the class IX and X students. Around 80 percent of our students are able to participate. The percentage goes down in the lower classes. But we give students activities to do on WhatsApp groups,” Hadule said.

He added that teachers have also guided two-three students to come together to use a single device. “However, no matter how hard we try, around 70-80 students from our school are still out of our reach,” he said.

Mahatmaji Surwase of ZP School in Khadakwadi village in Ahmednagar district also said that to reach out to the students without smartphones, teachers at the school call parents and provide them with study material wherever possible. 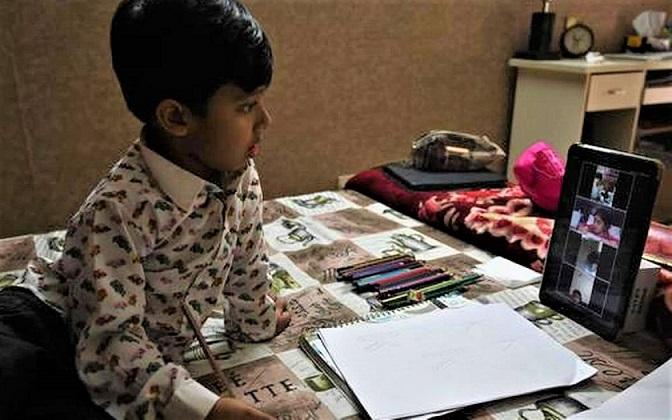 Kathole also said that if lectures are conducted on television, more children would have access to them. “However, I don’t think any such programmes are ready with the government yet,” he said.

Bhoyar also said that if the government permits, he would start classes for at least class X and XII students in shifts.

Renu Dandekar of NGO Loksadhana based in Chikhalgaon village in Ratnagiri district questioned why is anyone not finding any other alternatives to online education.

“Online education is anyway not a good solution to the problem. It will be very difficult for the children to sit in front of a device and try and learn. Would this part of the curriculum be taught again in the regular classes or not is also doubtful,” Dandekar said.

She suggested, “Schools could form small groups of students, who can help each other learn with help from teachers, and older children. Smaller groups would ensure social distancing, and also the problem of access to education.”

In fact, several urban parents have also questioned the efficiency and utility of online learning, demanding that younger children must not be made to take classes on digital platforms. The Karnataka Government has already banned online classes for children up to class V.

Maharashtra State Education Commissioner Vishal Solanki told Indie Journal that the Government is designing guidelines to resolve the issue and reach out to maximum children.

“We have held discussions with all stakeholders like administrative officers, teachers, parents, etc., and we have considered the issues that are being faced in imparting education. We would be issuing the guidelines soon.

Meanwhile, Hadule also said that the rural schools have been instructed by the Government to ensure that all children in the village are enrolled in the school.

“We have been asked to enrol all children in the village, including those who have returned to the village with their families from cities during the lockdown between June 15 and 30. This is to make sure that no child is deprived of schools and education,” he added.