A new coalition: IT employees across India stand with farmers in protest of new farm bills

The union was also part of protests against the labour reform bills passed in the Indian Parliament.

On Friday, September 25th, farmers across the country took to streets against the agricultural reforms. IT professionals from Delhi, Kolkata, Mumbai and Hyderabad under the AIITEU expressed their support to the protest

“The protest on Friday was a statement from us, that the farmers and labourers and everyone else are standing in unity against the fascist regime,” says Cheenangshuk Das, an IT professional from Kolkata. Das is also the Joint Secretary for the All India IT and ITeS Employees' Union (AIITEU) Bengal.

On Friday, September 25th, farmers across the country took to streets against the agricultural reforms passed by the Prime Minister Narendra Modi led NDA Government despite opposition from the farming community as well as activists and opposition leaders. Several people, trade unions stood in solidarity with the farmers. IT professionals from Delhi, Kolkata, Mumbai, and Hyderabad under the AIITEU also expressed their support to the protest in their respective cities.

“There were two reasons why we entered the protest. One is that as IT professionals, we know that this corporatisation of the agricultural sector is driven by both Indian and multinational tech companies. If these companies monopolise the sector, as a union we believe that it is not going to be good for the farmers, and they will be exploited. Secondly, even as a general citizen, we can see that the interests of these companies are directly opposite to those of the farmers. We cannot let out farmers be subservient to imperialism,” says IT professional Jaai Vipra, who conducted the protest in Mumbai.

Two days prior to the nation-wide farmer's protest, the union was also part of protests against the labour reform bills passed in the Indian Parliament. “Both these bills were passed without the due procedure,” Vipra adds.

“This is nothing but a replication of colonial history. IT employees have recognised that. These reforms are going to affect everyone. And together, the farmers as well as the workforce stand against them,” Das adds.

Karnataka State IT/ITeS Employees Union #KITU extends its solidarity and support to the call for countrywide protest and resistance action by peasants, today (25th Sept) against the anti-farmer destructive legislations being pushed through by the Central Government#NoToFarmBills pic.twitter.com/uOvm6WLJfr

The statement released by the Union against the farm bills reads, “These bills herald an era of the complete subordination of Indian agriculture to imperial interests. Increasingly, these interests are represented by large technology companies whose interests are contradictory to that of peasants and agricultural workers. As technology workers, we deplore this subordination. As aware citizens, we strongly condemn the Central Government’s disregard for democratic processes and its policies designed to help its cronies.”

One of the coordinators for protests in Hyderabad, Anuj Chatterjee said that the solidarity from the professionals in the city was more of a virtual one.

“Most of us were working from home and were not in the city. But we needed to express our protest. Even if we belong to a totally different domain, we understand that these protests are going to affect us all. And we need to stand with each other,” Chatterjee said. 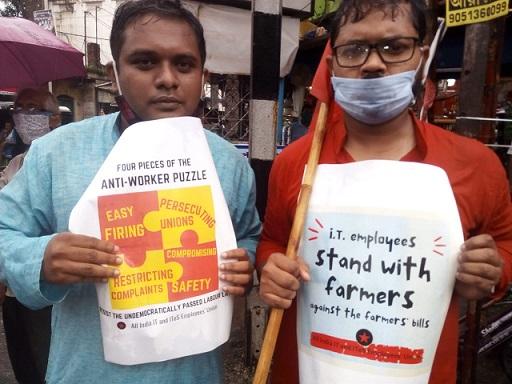 For Rikta Krishnaswamy, who is based in Delhi, taking to streets was a necessary part of truly registering dissent.

“Friday’s protest was an outcome of everything that had been boiling in our hearts for a long time. When the lockdown began, the Ministry of Labour came out with some progressive notices like no retrenchment. However, those were soon withdrawn. People are now calling out all the lies of the government. There is a larger unwillingness to deal with all the lies,” Krishnaswamy explains.

She also says that people have now realised that merely signing a petition is not enough. “Solidarity is important. But just signing a petition or writing a letter is not going to make the real difference on the ground. For that, we need to stop only talking about the issues, and do something. It’s important to show up,” she adds.

“We stood with the protesting farmers against the government’s moves to ruin the agricultural sector. We are certain that increasing such worker-peasant solidarity will help our joint fight against the crushing of our rights at the altar of big capital,” the AIITEU statement concludes.