Can a country with these many pending court cases afford long court vacations?

The Supreme Court of India is set to go on a summer vacation of around two months, from today onward. The High Courts as well as several lower civil courts in India have been taking vacations since the summer has started. While the judges are said to use these vacation days to read, research, relax and ponder over their work, can a country with close to 5 crores pending court cases in all its different courts afford these long holidays?

At present, Allahabad High Court in Uttar Pradesh has the highest number of pending cases in India, followed by the High Court of Rajasthan and then Maharashtra and Goa’s Bombay High Court. The Allahabad HC has a whopping 10,27,750 cases pending. Rajasthan and Bombay HCs have 5,95,667 and 5,85,966 pending cases respectively. This is just the number of cases pending at three major high courts in India. In total, 4,74,75,818 cases are pending at India’s Supreme Court, High Courts and all District and Taluka level courts.

It is a common practice for the courts in India to take long vacations not just in summer, but also during winter (Christmas), Diwali, etc. But the piling number of cases in the courts, a number that has only increased since the COVID-imposed lockdowns since 2020 that forced the courts to go virtual or shut down for long periods, has triggered a newfound debate around the necessity and practicality of such long vacations in India. While Chief Justice of India (CJI) NV Ramana has been a propagator of reforms in court and filling vacancies in courts across the country, the court vacations do not seem to be a part of his discussions or any discourse for that matter.

Are long vacations to be blamed for the piling pending cases in the country’s court? “While we see the issue of court vacations being discussed in newspaper articles, there is no discussion on the matter at national or even state-level governments. Not only that, but the Bar Council of India, too, has never really taken cognisance of this matter,” says Adv. Ravindra Bhawar.

“It’s the SC and the HCs that make decisions about the long court vacations. Of course, there are discussions among some small groups that believe that these vacations need to be cancelled to speed up the process of case disposal and justice. However, no one speaks about this openly for fear of contempt of court. So this discussion needs to be led by institutions like Bar Council of India or Bar Council of Maharashtra, etc.,” he adds.

Bhawar further says that it’s majorly the Supreme Court and the High Courts that take the maximum number of court vacations. “At the lower level, it’s just the civil court judges who go on these vacations. The criminal court, consumer court and family court are functional throughout the year,” he says.

The tradition of long court vacations is said to have begun in India during the colonial period itself. The judges appointed in Indian Courts by the colonial government were British and their families would often be stationed back home. So they required long vacations to go back home to visit their families.

India’s harsh summers were also said to be unbearable for the British judges who were not used to the weather conditions here. Thus, the summer months were often to be spent back home, which led to the closure of the courts during that period. After independence, the tradition of long vacations continued, paving way for Diwali vacations as well, as now most of the judges were Hindu.

Today, the tradition of vacations is seen by many as a remnant of colonial times that has stuck with the judicial system to date. There are vacation benches that function during these vacations, however, they only deal with the matters that are perceived to be urgent by the courts.

“A lot of times, civil matters are not seen as urgent by the courts. In case any person has to get their case heard urgently, they have to go through a long process of seeking permission from the district court,” Bhawar said.

Many judges are of the belief that the vacations are an integral part of the judicial processes as they are necessary for reflecting upon the work that cannot be done on the sitting days. Many also argue that the judges need this long rest from hearing cases.

“This argument is not right. Even if the judges get a break during the vacations, their workload will only increase post-break owing to the pending cases piled up through the vacation months,” Bhawar added.

As per the data provided on the website of the Supreme Court (SC) of India, as of May 2, 2022, a total of 70,572 cases have been pending at the SC. The number of pending cases in the 24 High Courts (HC) across the country is 59,16,554, while in the district and taluka courts, the case pendency rises up to 4,14,88,692 (as per the data available on the National Judicial Data Grid - NJDG). Why are such a large number of cases pending in all the courts across India?

As per PRS India, between 2019 and 2020, pending cases increased by 20 percent in High Courts and 13 percent in subordinate courts. While the intake of new cases was lowered in 2020 due to the pandemic and lockdown, the pendency of the old ones increased due to the restricted functioning of the courts.

The pendency of cases in the courts affects further processes as well. Three in four prisoners in Indian jails in the year 2020 were undertrial, as per the government data for the year. No data has yet been made available for the year 2021, but it has been estimated to increase.

The increasing number of undertrial prisoners also puts more pressure on the jails, an issue that was highlighted especially during the Coronavirus lockdowns.

If the court vacations were one thing, the COVID pandemic, especially during the first and the second waves in 2020 and 2022 caused a major disruption in the clearing of the cases. The courts shut down their functioning in March 2020 as the unprecedented COVID outbreak and lockdown began and did not open completely until the next year. The second wave of COVID-19 in 2021 also kept the court functioning disrupted. While the court shifted to online hearings, it took a while until the processes were streamlined.

“Even when the court went online, there was a teething period when everyone was figuring the process out. After a while, the hearings began smoothly. But it was only the SC and the HCs that could actually go online efficiently. It was very difficult for the lower courts to do sso, because they lacked the necessary infrastructure,” Adv. Rama Sarode pointed out. 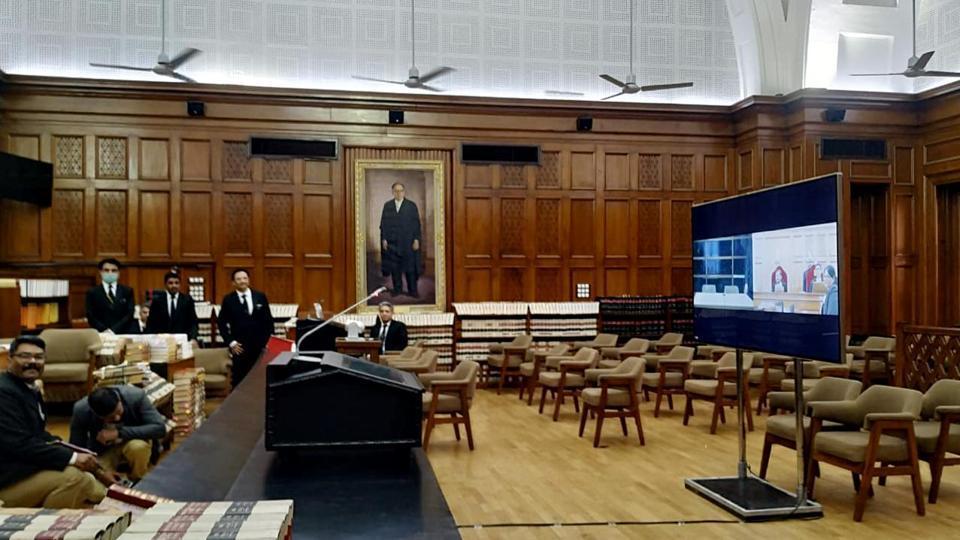 A hearing in the Supreme Court in April 2020. Photo - ANI

The onset of the pandemic halted almost all the hearings, except for bail pleas and urgent matters. Even after the courts started functioning offline, the changes in the post-pandemic world posed further challenges.

“When physical hearings began, there were the new rules of sanitising papers and isolating documents before they could be produced before judges. The court was not functioning at full capacity, so there was a shortage of staff. The intake of cases was still low due to these reasons. This affected civil cases more as they were not considered a priority and were not heard urgently,” Sarode said.

“The issue of court vacations certainly needs to be addressed. However, in order to deal with the issue of case pendency efficiently, we need to take care of other factors like making the courts infrastructurally sound and filling in judicial vacancies,” Bhawar said.

In fact, since his appointment in April last year, CJI NV Ramana has been emphasising the need to fill in the vacancies in all of India’s courts at the earliest. He recently said that with the effort that was put into the same, 126 vacancies in various high courts were filled in less than a year. We are expecting 50 more appointments, he added.

“Only talking about vacations would not help. In civil courts, it is impossible to get the next date of hearing before one month. The number of judges, other staff, infrastructure all need to be taken care of, along with the vacations,” Bhawar said.

“The appointment of judges needs to be proportionate to the rise in population. All the systems have to be in proportion to the population. So obviously, until then, the pendency is going to increase,” Sarode added.

The lack of adequate infrastructure also prevented the lower courts from going online, which in turn again added to the pile of pending cases.

“To bring judiciary reforms, it is necessary that the courts get sufficient funding and get the infrastructure that they need. Right now the working conditions are pathetic. Judges will be motivated to work too if the infrastructure improves. This has been something that people like us have been demanding for a long time,” Sarode said.