Who will pay-up for the garbage to be cleaned? Cleaners suffer in the confusion

Waste-pickers are taking up dangerous jobs to feed their families.

Aayush Pandey, Pune | Akash Mhaske is a waste-picker in Pune's Vidya Nagar area. He earns his livelihood by collecting and segregating waste from local residents and selling scraps. However, this job, one of the most important jobs in a city, is so underpaid that he has to sometimes take up the dehumanising job of manual cleaning of septic tanks, a task that has proven fatal to many across the country.

Most waste-pickers who are instrumental in keeping the city clean find it difficult to make their ends meet, as they are completely dependent on the payments made by the individual citizens, as any payment policy from the city administration is absent. They have to take up other jobs after their tedious morning routine to feed their families.

Jyoti Singh Chavan is a waste-picker associated with SWaCH, a cooperative of waste-pickers, who is posted at the Bhim Nagar segregation point in Kasba Peth. She said, “Our low income is the main issue because citizens do not usually pay and when they do it's just about Rs 20-30 per collection. This puts our monthly income at around Rs 3,000. We can’t manage everything in this amount - medical, food and electricity bills keep piling up and force our hand on other jobs. I clean dishes at local dhabas and my friend sweeps and cleans houses after our shift is over."

"Medical, food and electricity bills keep piling up and force our hand on other jobs."

Mhaske shares a similar story. “I am a waste picker as per books, but sometimes I take up the job of manual chamber cleaning for more money. Whenever there is a tender for cleaning, we get informed on our WhatsApp group and we get the job on a first-come-first-served basis. We’re employed when those who usually do the work are unavailable. Garbage picking is not exactly a well paying job. Sometimes we get lucky and find some valuable metals that we can sell for extra money. Otherwise not so much. Septic tank cleaning is instant money,” He explained.

Poornima Ovhal, a SWaCH coordinator in Wagholi, said, "Citizen's lack of awareness and willingness to pay makes the waste-pickers suffer. Some of the waste-pickers under me also work multiple jobs to manage a full course meal. Some work at houses, some do scrap collection - the male workers especially. Being a supervisor I can only help them get their dues. But even we can't argue with the citizens every time they pay less." 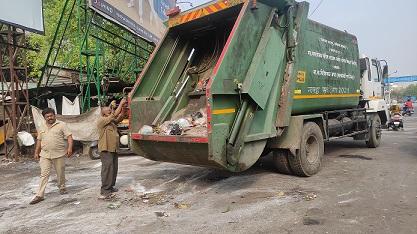 Mhaske explained further, “We gather before work at Saraswati School in Tingre Nagar. There are about 120 workers including contractual and regulars. Men clean the sludge from the inside the tanks while women carry and collect them to be sent for dumping. Pune-based workers are provided with gloves and masks sometimes and they get paid upto Rs 700-1,000 depending on the size of the tank. However, non-local workers are not provided with any kits and are paid Rs 500-700.”

On enquiring about this issue with SWaCH, coordinator Mangal Pagare said, “We do not oversee the manual scavenging, so I cannot comment on the subject. However, we have pushed PMC to provide health insurance to workers and their families and to also incorporate basic schooling facilities for their children. We understand how harsh the conditions were during COVID and we do acknowledge the loss of many frontline workers.”

The Pune Municipal Corporation (PMC) does not pay the waste-pickers, but has decided the amount that the citizens should pay them.

“The civic body has decided that people should pay the waste-pickers Rs 80 in urban areas, Rs 50 in slum areas and Rs 140 in commercial areas. But it was noticed that in slum areas, waste pickers do not even make a paisa. So PMC pays Rs 10 for each house as an incentive in such areas. Amenities such as PPE kits, dress codes and insurance are being provided and scholarship provisions for their children are also included. So in total, the administration spends around rupees eight crore annually on waste-pickers. This is why the payment module is public-based because PMC is taking care of them in other aspects," Ajit Deshmukh, Head of PMC's Solid Waste Management Department said.

"To be able to secure better futures for our grandchildren we have to do it."

Sarubai, a SWaCH waste-picker since 2006, said, "We have seven members in our family. Among them, three work as waste-pickers. We collectively make around Rs 8,000 every month for waste-picking which is never enough to fill our bellies. There are medical bills, books for my grandchildren and other necessities for which we have to take up the job of cleaning washrooms, both public and private. But it doesn't matter if the wages are less or more, we have to work. None of the earning members in my family are educated, so no one else will give us jobs. So to be able to secure better futures for our grandchildren we have to do it," she said.

Pagare on the other hand, said that the issues are not of the payment module.

“The payment module has no flaws. It’s the other factors that are problematic. There are many private contractors who are also working to collect waste and they carry it all in trucks to the dumping grounds for incineration. Because of this, the general public denies paying day-to-day segregators saying that the waste was collected for free already. We are also launching a training programme SWaCH+ under which the segregators will also learn how to recycle dry waste themselves, that could further enhance their income,” She added.

Upon visiting a segregation point at Vidya Nagar, it was clear that waste pickers and segregators worked without any safety measures like masks and sanitisers. “I segregate dry waste and wet waste and have been working there for more than 15 years. We are supposed to get Rs 60 for each house’s waste that we segregate but that is not happening,” said Shivganga Sharma, wastepicker working at the spot. He was not aware that he is supposed to get paid Rs 80 per house as per PMC guidelines.

“My son and I report at the segregation point at six in the morning to sweep the streets, pick up waste and segregate it till about 10 am. We separate dry wastes, wet waste, scrap and metal. Then the dumping truck comes with more waste from houses in the surrounding areas. The drivers of the truck are all provided with masks, gloves, sanitisers and soap while we received no such amenities. We make less than Rs 5,000 monthly with a marginal increment during festivals. Every year the prices of petrol rise, but our payment doesn’t. We sell off any scrap or metal we find during segregation but that too never fetches us more than Rs 100,” Shivganga added. 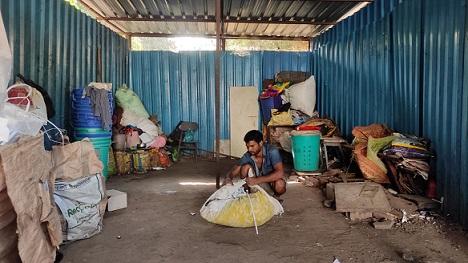 However, the SI (Supervisory Incharge) of Tingre Nagar segregation point Amina said that the segregation point comes under SWaCH. “We provide the workers with PPE kits, soaps and handwash every month. I, as an SI, also take care of arranging their vehicles for garbage transport. We also listen to their personal problems, guide them on filling out necessary forms for the education of their children and help them get their dues if pending from anywhere. And the workers have also been provided with rations during covid.”

She feels that the workers are happy with whatever payments they get. “There are employees who are over 60 years of age and who have worked for 15-20 years. Currently, the door-to-door garbage pickup and collection price is Rs 75 (She seems unaware of the rate being Rs 80) which the citizens are supposed to pay to the workers directly. They are not paid by the government and whatever they get is adequate for them. Along with the payment from citizens, they also sell anything that they find of value during segregation, so they are happy workers.”

But Mahesh Sharma, son of Shivganga Sharma, has a different story to tell. “Amina Madam has barely come to the office since her marriage in December last year. She comes to mark attendance some days in the morning and leaves. We don’t interact much with her either since she’s a Muslim,” he said.

"We get hurt on the job sometimes when there are shards of glass in the waste or anything sharp in the garbage."

“Few of my friends who work as auto drivers help us with the transportation for collecting door-to-door waste, carrying rations and other transportations. They sometimes get us medicines too in emergencies. We get hurt on the job sometimes when there are shards of glass in the waste or anything sharp in the garbage. Since we have no gloves or anything we need to manage somehow. Even first aid kits are not available at the segregation point,” Sharma added.

Another worker who requested anonymity told Indie Journal more about the problems the workers had faced. “In 2019, I lost my husband in a septic tank cleaning in Vidya Nagar. My husband and I had three sons, after his demise the eldest turned into an alcoholic who would beat me if I refused to give him money for liquor. My youngest son died during the second wave of covid. We didn’t even have enough money for two square meals a day, the financial handicap ate my son and I could do nothing,” said the worker tearing up.

"I think the problem in this payment mode lies in awareness. Not most people are aware of the groundlines of the program about direct payment to waste pickers. Citizens think that they have paid taxes and due to this, they don't even bother paying the workers. Others that pay sometimes bargain with the workers," said Ovhal.