Bulbbul surprises with its near-perfect production and a genuine feminist message.

'A child bride grows up to be an enigmatic woman presiding over her household, harbouring a painful past as supernatural murders of men plague her village.' - Netflix India.

As we know, Netflix India's horror track record has been very poor in the past two years and there was not much excitement at all for Bulbbul after the disappointment one experienced with Betaal.

But lo and behold, Bulbbul comes in and surprises everyone with its near-perfect production and a genuine feminist message. Bulbbul is the directorial debut of Anvita Dutt, produced by Anushka Sharma's Clean Slate Films production house.

This review is full of spoilers to help discuss the themes and symbolism in the film so we suggest one watch the film first and come here again for greater insights.

The plot of the film

The film opens with a five-year-old girl Bulbbul (Tripti Dimri) getting married to a fully grown adult Bade Thakur, Indranil (Rahul Bose) in the Bengal presidency of 1881. Bade Thakur has two younger siblings, Satya (Avinash Tiwary) and Mahendra. While Mahendra is already grown-up but mentally challenged, his sibling Satya is of somewhat the same age as Bulbbul.

Over the next fifteen years, Bulbbul and Satya form a friendly bond due to their similar age, and due to this Bulbbul naturally falls in love with Satya. Indranil starts to suspect Bulbbul of infidelity and sends away his brother Satya to England for his further education.

Satya returns to his home in Bengal after five years and finds out that some kind of killer is hunting the villagers down. While the villagers are sure that the murders are done by a forest witch; Satya is sure that a killer is on loose and he sets to bring down the killer. 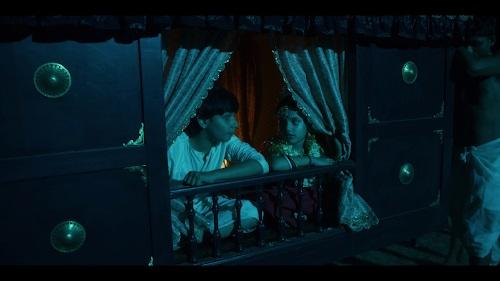 The Idea of women's liberation from cultural, social and sexual exploitation in the colonial casteist feudal India and the mythological parallels

While films and shows in India tend to always appear as edgy and over the top when talking about feminism, Bulbbul actually presents a genuinely heartfelt feminist message. The feminist aspect of the film strongly resembles the position of women, the exploitative one, in Hindu mythology.

*MAJOR SPOILERS* Bulbbul is married to the Bade Thakur but she becomes the property of all the three Thakur brothers just like Draupadi in Mahabharata. The character of Satya can be said to be a character resembling Krishna. While Draupadi feels or other women feel Leela for Krishna, Krishna himself only aligns himself as their sakha or friend. Same way Satya acts like a Krishna to Bulbbul's Draupadi but yeah there are differences. On the other hand, Dr. Sudip can be said to be the Karna of this story. He is masculine, compassionate, and intelligent like Karna. Sudip is in love with Bulbbul but his social class and position make him artificially incapable of achieving that love just Like Karna's caste made him unable to achieve Draupadi's love. 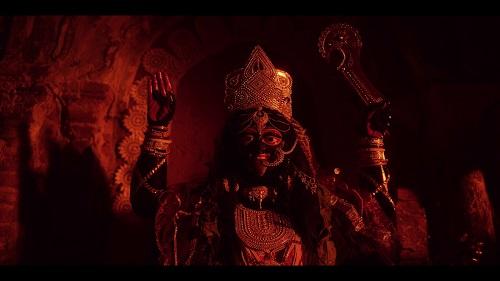 Another woman that Bulbbul reminds us of is Sita from Ramayana. Indranil suspects Bulbbul with infidelity and punishes her just like Ram suspected of Sita. While Sita had to go through the agnipariksha, Bulbbul had to go through domestic violence. Satya in this way can be said to represent Ravan who never touched Sita. Though Sita's agnipariksha only intended to burn her; Bulbbul's agnipariksha results in the burning down of a whole forest.

Finally, Bulbbul also represented Maa Kali as Kali the Liberator. But instead of the devi possessing and liberating her, Bulbbul herself gets liberated on her own and starts killing all the paedophiles and abusive men of the town which resulted in the liberation of more women.

The toe ring in the film symbolizes the objectification of women as a mere machine of production and also the patriarchal control that men possess over women. When the ring in her toes gets destroyed Bulbbul is liberated from that control.

The film showed the fact that women don't share any sisterhood even if they are exploited equally. In a capitalist structure, women are the biggest exploiters of women. This is because even in exploitation women tend to place their material interests in the forefront rather than compassion. There should be a comradeship that results in the unshackling of patriarchal chains but it is not possible in a capitalist economy supported by the patriarchal structure. 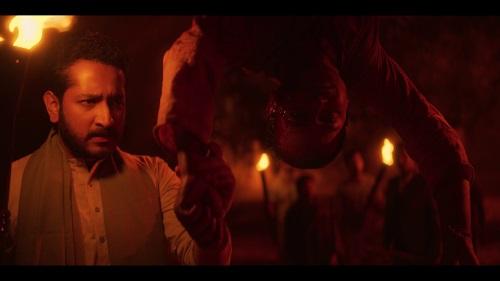 The film also touched the idea that women in rich families tend to be abused more than the average lower class or even lower-middle-class families. When Chhoti Bahu (Paoli Dam) tells Bulbbul that there are big mysteries in big mansions, ignore them and drown in whatever material desires you get to fulfill in a big house. Bulbbul is told to hide her being raped just to preserve the material prosperity attained through this patriarchal exploitation.

A very critical point that the film touches is that the men have the privilege to consider them as Robinhood or some nonmystical hero for justice but the same kind of freedom is not available to the women and then women like Bulbbul have to take the form of Kali, a goddess to seek justice. Because we see women as an example of greatness only in the form of a Goddess or a Queen.

While Bulbul's protest to this structural violence with her own violence may feel justifiable in that historical context we have to remember that violence cannot be the answer to the patriarchal exploitation of women. Men are not born criminals. The exploitation of women is an ideological act first and foremost that results in the physical act of violence. To counter this we have to change the deep rooting of these patriarchal ideas through a by changing their minds through ideological dialogues.

There are more feminist ideas here but this will be it. One appreciates the feminist tone of this film, it feels natural, real, and not too on the nose. Horror does not have to be supernatural, horror is what reality is.

Bulbbul is a real masterpiece when it comes to the camerawork and cinematography. From the opening sequence, one is pleased with the aesthetics, the set pieces, the colour choices, and the wardrobe used for the film.

See the wide range of colours used in the film. The tone and the feel were on point in this film. An astounding job by the cameraman, set designer, and the director. The film has this perfect vibe of the 1800s and the colour scheme is perfectly conveying the flow of all the emotions whether its fear, love, or mystery. 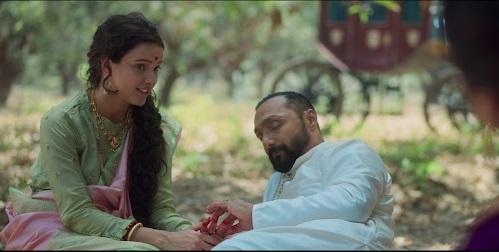 Another fact is that film does not hold back when showing some intense scenes. I literally felt two of the most miserable scenes in the film unwatchable; not because they were cinematically bad but because they kept going on and on and I couldn't watch such a real character to suffer so much. The soundtrack was good if not memorable.

Tripti Dimri has given an outstanding performance as Bulbbul. She is innocent, magnetic, playful, vengeful, and mystifying at the same time. This is the performance she will be remembered for. She has perfectly encapsulated the creationist and the destructive force that a woman can be. You will fall in love with her once you watch this film. 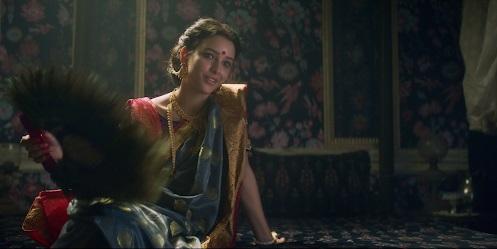 We are seeing Rahul Bose after a long time on screen. His performance required that sociopathic air and the shades of violence that come with it and he portrayed it with ease. Excellent performance on his part.

Paoli Dam's portrayal of jealous, lustful, and broken Chhoti Bahu was good too. Other actors were perfect too; none of them felt unnecessary or incompetent.

Yeah, we were so much into the message that we forgot about the plot.

While one may love the symbolism and the message, the plot leaves the film to be very predictable from the get-go. A film first and foremost should be enjoyable and it is enjoyable but we have to overlook some plot details.

There is nothing new plotwise and while the film feels completely fine till the big reveal; later it succumbs to an aimless or very unsatisfying conclusion. Though the film leaves an impact but the last fifteen or so minutes were very bland compared to what we saw in the former part. There is nothing much to dislike other than that.

Though the film is not perfect plotwise but is a near-perfect representation of feminism and that rarely happens with Indian cinema. The production quality is top-notch, the film is beautiful to look at and I want everyone to watch Bulbbul just for the message and the acting.

One will definitely love Bulbbul!