Weavers in trouble in PM's adopted Village in Varanasi

Varanasi goes to polls on Monday, March 7, in the seventh and last phase of Uttar Pradesh Elections.

Snehal Mutha | Varanasi | Amid the smacking sounds of Tana-Bana (warp and weft), the red-green threads weaving into a shining Banarasi fabric, Vinod is sitting behind the machine carefully operating them. “Badti mehangai, kabad ke bhaav mein machine bechane pe mazboor Kar diye hai. (Rising inflation has forced us to sell our machines at very low rates.) In-coming times, we might be finished, bunkars (weavers) will be no more the creative artisans, we all will become dihadi mazdoor (labourers)," he says.

Vinod Kumar, 45, hails from Benipur-Nagepur (lives on the border of both villages) in Varanasi, the adopted village of Prime Minister (PM) Narendra Modi. Kumar entered the weaving world of Banarasi saree at the age of 11 years as a bani bunkar (weaver). Today he owns a handful of powerlooms, leaving him a surplus of only Rs 5,000 per month. For him, it is not enough to run a family and keep the traditional business alive. Once owned 14 looms, but today possesses four looms. He had to sell them as production and maintenance was costing him more than earning a decent profit.

Like Vinod, there are many in Nagepur village, who sold their powerlooms. Few migrated to other cities such as Surat, Noida and Mumbai to work in textile industries, and the rest took up farming. Fazalu Ul Rehman, a bunkar (weaver) and social activist says, “First, in 1998 powerlooms replaced handlooms. So natives migrated to Bhiwandi, Malegaon, Surat, etc. to get oriented in powerlooms. We purchased second-hand machines from Kolkata and started making a living out of them. Now, the same looms are on sale at scrap rates as coping with increasing inflation and no profits in return is becoming a challenge.”

In Benipur-Nagepur, mostly bunkars produce nylon-based Banarasi Sarees, that are comparatively cheaper. Gadidaar (traders), bicholiya (agents) buy them for Rs 500 per saree, as they say. The weaver is left with a margin of Rs 100. Nylon thread costs Rs 325 per kg, two sarees can be weaved in 1 kg of the thread. Earlier, it cost 200 per kg. The processes of banwayi (weaving), rangwayi (dyeing) and judayi (reeling) involve raw material, labour, electricity, transport production costs amounting to around Rs 400.

The production of Resham thread Banarasis is a huge investment for rural weavers in Varanasi. If the cost of any of these factors increases, the margin decreases, hence denting their livelihood. 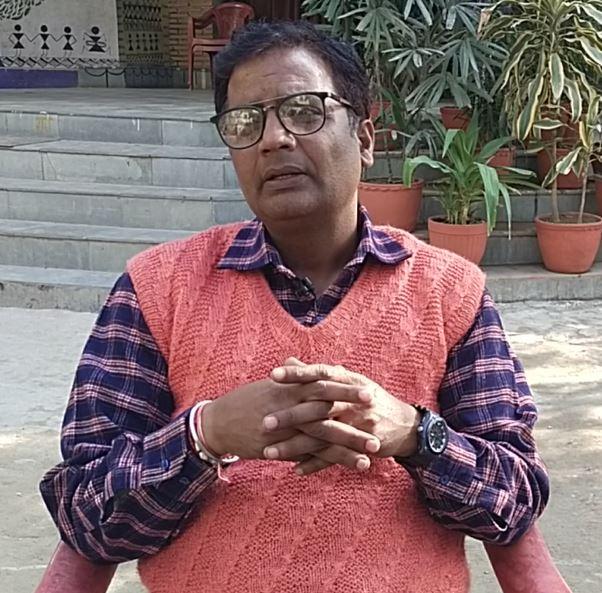 "Bunkars lost their prosperity to the needs of changing buyers, technology and no government control on the factors of production. Directives are needed to place a system that can regularise the traditional business. For example, fixing Minimum Selling Price (MSP)," says Nandlal master. He is a teacher, running a school in Nagepur for the past 28 years. Over 200 children of bunkars are his students.

During the pandemic-induced lockdown, the situation worsened further. First, lockdown locked the powerlooms. Later, on January 1, 2020, an official notice informing the new power tariff was issued. The electricity department replaced flat rate with unit rate. Earlier as per 2006 rules of the electricity department, weaves paid a flat rate of Rs 72 per powerloom, amounting to Rs 400 to 600 per month. Under new rules, per unit is charged for Rs 13, which amounts to Rs 3,000 to 7,000 (depending on the number of handlooms and units used).

Vinod’s brother pointed out, "The tariffs have increased fivefold, weavers have not cleared their bills for the past two years. We cannot afford to pay the lump sum amount."

The Bunkar forum, Bunkar Saza Manch and Bunkar Biradrana Tanjim made several appeals to repeal the new tariffs but were left unanswered. In fact, the electricity department harassed them to get their dues cleared. In December 2021, the weavers protested demanding their bills to be waived off and to put the old system in place.

Where will employees go?

Selling off the powerlooms affected both the employers and employees. Vinod started as bani bunkar at homerun handlooms, which employed 500 people from 50 nearby villages. “There was a time when over 500 families were involved in weaving. Everyone had five to 10 looms. People without looms worked with them. Today it is vanishing, Jo shaan thi Kala ki Woh khatam ho Rahi hai, Agar khatam Hogayi Toh 75 percent log berozgar ho Jayenge. (We are losing the handlooms, our pride. If the business finishes completely, at least 75 percent people here will be unemployed),” added Nandlal Master.

In Varanasi, household industries manufacturing units, spinning and weaving accounts for 50.70 percent of the existing employment in Varanasi, as per the 2011 Jawaharlal Nehru National Urban Renewal Mission (JNNURM) report. According to Rehman, one saree requires 18-20 workers (with different skill sets) to work on it. Everyone has a role to play, from colouring to weaving. Winding up one home-run loom costs many workers their livelihood.

Shahina, 50 is a weaver from Peeli Kothi, Cheetarpura. She says 3 lakhs bunkars have already migrated from Varanasi.

Natives said that a majority of youth have migrated to other states. "What would I have done here, so I took a degree and got a job. However, during the lockdown, I lost my job. Despite bunkari being a low-paying work, I had to get involved in the work here,” says Akhilesh Patel. Patel, a neighbour of Vinod, came back to Nagepur from Noida during the first lockdown. He is an electrician, who had bagged a job after completing a course from Industrial Training Institute (ITI).

"Pehla jaise kaam nahi raha ab, bunkari pe bacche kaise palenge (The work has changed now. How do we raise our children by weaving?)," says Nirmala Devi. Nirmala is a Nagepur resident who works as a part-time bunkar and full-time farmer. Nirmala’s husband is differently-abled. She lost her 12-year-old daughter a few months ago in an accident. 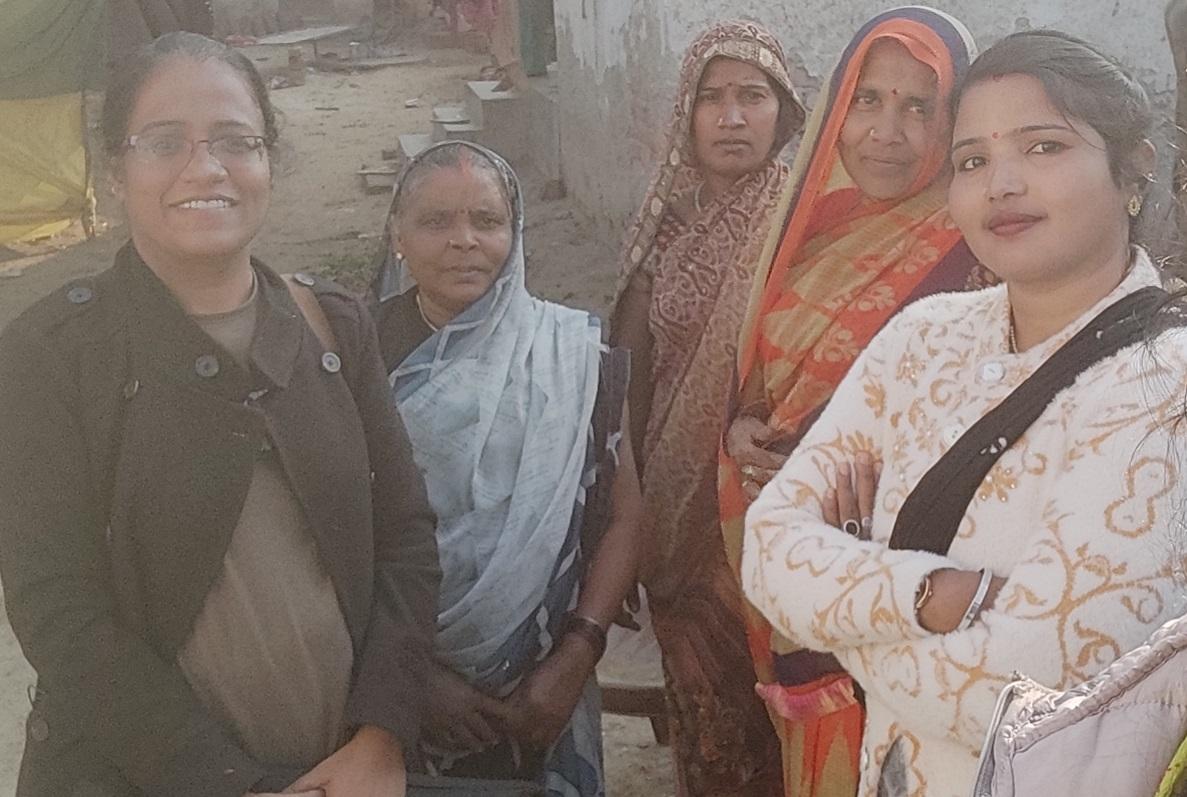 Sone, Ngo worker with women of the village

Women enter bunkari through a family-run business or work as a bani bunkar. They carry out activities such as sorting out the thread, doing embroidery work and more. The money earned complements their other income sources.

Tabassum, 42, involved in the embroidery artwork on the Banarasi saree says, "Is Rs 100 per day enough for us to survive after working long hours, this work is just extra income." She is a resident of Peeli Kothi.

Lok Kalyan organisation in Varanasi works to give voice to bunkar issues. They started self-help groups for women to empower and create financial independence. Women volunteers monitor these groups and introduce activities that can elevate their financial conditions. For example, manufacturing washing powder. Women from all religions are part of it. Sone, a volunteer with the organisation says, “Women are unemployed, but the SHG has helped access money."

It is believed Bunkaris are sidelined owning to their religious identity. There is a myth that bunkari is a Muslim artisan-dominated business. Researcher Archana Agrawal's paper titled ‘Pauperisation of Handloom Weavers of Banaras’ argues that the city has 40 percent non-muslim weavers, whereas of the total weaver population in areas adjacent to Varanasi city, non-muslims constitute nearly 80 percent. They belong predominantly to the backward and the Dalit castes.

The weaving of a Banarasi saree involves multiple communities. For instance: Maurya deals in Kalabatu Zari, a thick braided gold thread used for decorating the borders of garments. Both Hindu-Muslims are weavers and traders. Gujarati, Bengali and Marwari people are wholesale buyers.

Vinod is a Hindu bunkar doing business with a Muslim gadidaar in Lallapura, Badi Bazar, for the past 10 years.

In 2019, PM Narendra Modi visited adopted Nagepur. Bunkars requested a meeting to present their 14 demands in front of the PM, but they did not get the chance. The 14 demands included fixing MSPs, banishing agents, providing health benefits, introducing an employment-based programme for bunkars, providing patents to handloom designs and opening a facility centre.

Vinod says, "The existing cooperatives are of no use. They are away from villages and are not accessible to poor bunkars. They only cater to Mahajans (traders)."

Varanasi has 100 (approx) cooperative societies and two apex cooperatives, established for bunkars to sell their products and avail various schemes. "Money is routed through cooperative societies, hence rarely reaching the weaver. Moreover, purchases by the government are also made through these cooperatives. The track record makes them ‘cooperative mafias’ exploiting poor bunkars,” adds Fazlu Rehman.

The UP Government made provisions of Rs 250 crore for the One District-One Product (ODOP) scheme and Rs 30 crores issued for traditional artisans of urban and rural areas under the Vishwakarma Shram Samman Yojana sector. However, weavers say these benefits are not reaching Nagepur.

Did adopting the village benefit bunkars?

Nagepur has a population of about 2,500 (weavers claim) people. Natives assure that only visible development of lights, roads and water is accomplished. The livelihood problem is yet unresolved.

Nandlal Says, "Nagepur is a 100 percent bunkar village, but no programmes have been initiated to elevate the growth of bunkars. In fact, a Khadi training centre was opened in Jayapur, another Sansad Adarsh Gav (SAG) of PM. Being a farmers-dominated village, the centre did not do well there. Does this make any sense, when real problems are left unattended"?

Despite three different state governments, (Mayavati, Mulayam Singh Yadav and Modi- adopting Nagepur), the village has no primary health care centre or an inter-college. "The nearest hospital is at least 13 km away from our village. Girl children drop out of school as there is no facility here to access higher education. They don't have the resources to learn in private school or travel 10 km to attend a government college,” says Nandlal Master.