12 opposition parties are likely to enter the fray.

Triangular contests are on the cards in the 2020 Singapore General Election as a record number of 12 opposition parties are likely to enter the fray. These parties could not reach a consensus over four group representation constituencies (GRCs) as of June 25, said a Straits Times report.

The Singapore People's Party (SPP) and the Democratic Progressive Party (DPP) staked their claim on the four-member Bishan-Toa Payoh GRC. They had jointly fought it and lost in 2015 to the ruling People's Action Party (PAP).

The Singapore Democratic Alliance (SDA) and the new Peoples Voice (PV) will be locked in a battle for the five-member Pasir Ris-Punggol GRC. SDA had contested the seat in the last election.

A three-cornered contest is likely to take place in two single-member constituencies (SMCs). The Progress Singapore Party (PSP) will take on the DPP in Marymount SMC and the Reform Party (RP) in the new Yio Chu Kang SMC, respectively.

The ruling PAP is fielding its candidates for all 93 seats. The party has appealed to voters to return it to power with a strong mandate so that it would be able to handle the crisis resulting due to the pandemic.

"Even though there are a couple of GRCs with potential multi-cornered fights, my sense is once Nomination Day comes, the GRCs will see one-to-one fights," he added. The bigger opposition parties may not field candidates against each other, said Dr Izuddin. 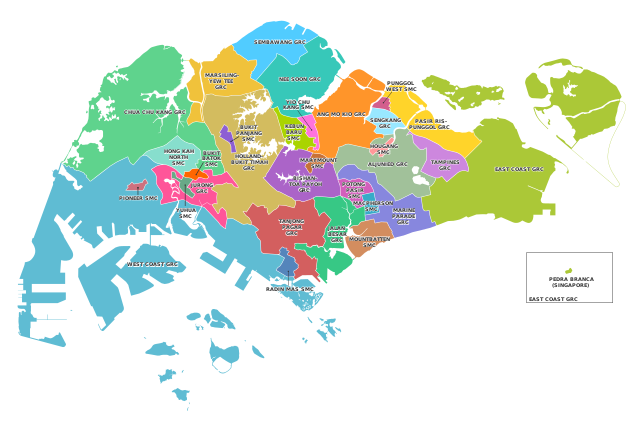 Boundaries of electoral divisions in Singapore during the Singaporean general elections, 2020. Credits: Wikimedia/Seloloving

National University of Singapore's (NUS) political science department’s Associate Professor Bilveer Singh echoed a similar view on the inevitability of multi-cornered fights. He said: "The entrance of PSP onto the scene, as well as other new parties like PV and Red Dot United (RDU), has made the ground crowded and they all need to find a 'chair' somewhere to sit."

He said the opposition parties forming a coalition never happened. Ideological differences and varying views on issues put a hurdle in such efforts right from the beginning. Political analyst Loke Hoe Yeong said opposition unity is a distant dream due to the fact that the pre-election negotiations among the opposition parties could not happen this year.

He said the growing disagreements among larger and smaller opposition parties is the reason behind this. "There is, frankly, no reason for the larger parties to have to negotiate with the smaller parties," said Mr Loke. He has penned a book, The First Wave, on the history of the opposition in Singapore. He said the opposition's previous coalition experiment early in the 2000s led by Mr Chiam See Tong, who cobbled together parties under the SDA had "failed miserably". "The idea was consigned to the grave in 2011 when the Workers' Party (WP) won its first GRC. That vindicated the WP's strategy of going it alone," he said.

Institute of Policy Studies senior research fellow Dr Gillian Koh said opposition parties could buy time to reach consensus while waiting for the PAP to announce its list of candidates. "There is not that much time if campaign collateral has to be produced, so I expect this to take place in the next day or two, if at all," she said. "It will be quite significant if no such meeting takes place. We will most definitely be in new territory with regard to opposition politics in Singapore if that is so."

Dr Mustafa said the usual opposition noise on the ground could not be witnessed this year due to the pandemic. However, the established, bigger opposition parties negotiate behind the screen to avoid triangular fights. NUS' political science department Associate Professor Chong Ja Ian said triangular contests are more likely to take place among smaller parties. "The WP and, to a lesser degree, the SDP, are more established. If they do not appear in three-cornered fights, then there may be recognition from the other parties that they would lose badly in multi-cornered contests," he said.

Underlining the need of parties to contest polls for their survival, Singapore Management University's School of Law Associate Professor Eugene Tan said parties risk becoming irrelevant if they do not contest an election. Differences are likely to be resolved on Nomination Day. Although there has not been a "multilateral" pow-wow, parties negotiated in a "bilateral" fashion, said Prof Tan, a former Nominated MP.

If a candidate or team fails to earn 12.5 pc of the total votes, their $13,500 deposit per head will be forfeited.

Three SMCs had a three-cornered contest in 2015. Of these, independent candidates were in the fray in two. The third, MacPherson, had a contest among the PAP, the WP and the National Solidarity Party (NSP).

Prof Tan said the PAP may have a cakewalk due to the lack of coordination among the opposition in some seats going uncontested.

Opposition parties agreeing to fight less than half of the total seats could be a strategy that was employed in 1991 by Mr Chiam.

Prof Singh, Dr Koh and Mr Loke said this strategy has been proving irrelevant since 1997 when the PAP used a more local, municipal approach.

Prof Tan said the opposition could have a nuanced strategy based on this line. He said, in the backdrop of the pandemic posing challenges, parties are aware that voters may support the ruling PAP. As a result, for instance, the SDP's efforts to deny the PAP the two-thirds majority may strike a chord with voters.

Due to a large number of parties in the fray, some seats, or even GRCs, could also be won by opposition parties, weakening the ruling party. The PAP is likely to tell voters that such a scenario would hamper the country's strength to deal with big challenges rising in the wake of Covid-19.