The Politics of Pride

Homogenising the community is taking away the most potent arsenals that a marginalised group can have - the weapons of revolution and resistance.

Nikhil Baisane | As the world approaches the longest day for the Northern Hemisphere, a community that was banished to the shadows begins to come out and fly its freak flag. While different nations and cultures have their own times of celebration, the month of June is celebrated and observed as the Pride month by the LGBTQ+ community in many countries, especially the United States of America (USA). To commemorate this celebration of assertion, Indie Journal presents a series of articles on Pride and its implication in the Indian context.

The history of the ‘Western’ pride can be traced back to various origins, however, the Stonewall Riots of 1969, Manhattan, New York City are considered to be the beginning of a new era by many stalwarts of the community. With the rising sun rose a group of over 500 lesbian, gay, bisexual and transgender persons, rioting against the tyrannical police raid that happened at the Stonewall Inn, a well-known gay bar. This is considered to be a watershed moment in the modern LGBT rights movement, not just in the USA but the world. It provided the much-needed impetus for organising pride marches on a larger and more international scale. It was on the anniversary of this riot that the pride marches are officially known to have begun.

The term ‘pride’ was the brainchild of Craig Schoonmaker, a member of the planning committee for the 1970 pride march. Pride marches continued to happen and spread as rapidly as rainbow pops up across humid monsoon skies. India, though late, joined the party in 1999, just around the turn of the millennium. The first Pride March or Pride Parade in India was held in Kolkata on July 2, 1999. No wonder the world calls Bengal the France of India - what France thinks now, the world will think much later.

The Kolkata pride was attended by people from various metros, yet the number of attendants was a mere fifteen - none of them women. But even before the pride march, India witnessed its own Stonewall, when an organisation called AIDS Bhedbhav Virodhi Andolan (ABVA) organised a dharna in front of the Delhi police headquarters against the arrest of men from Central Park, Connaught Place, on charges of homosexuality. The dharna, while futile on paper, ignited a fire in the minds of the Indian LGBTQ+ people, whose mere existence was seen as a crime. This and the Kolkata pride accelerated the queer rights movement in India.

The beginning of the 2000s turned a new leaf for the movement. Pride began to be held in many cities of India and not just metros, but even the smaller cities such as Guwahati, Bhopal, Jaipur, Chandigarh, Gurgaon and many more. The number of attendants too grew exponentially, reaching thousands in many of these marches. But the LGBTQ+ movement has never been a cakewalk. It has always attracted controversies and complications - right from mental, legal, physical attacks to other, more severe, ramifications. However, the community, which has always experienced attacks from the ‘others’ or the outsiders, was not ready for a civil war within.

A debate rages wildly in the international queer community, but it achieves a much more sinister façade in India. This debate is about assimilation, assertion and identity. On one hand, we have a group of people who want to be seen as ‘normal’ or who want to become a thread in the homogenising fabric of the society, however at the cost of losing its own uniqueness. While on the other hand, we have another group that is much more radical about asserting its identity and which chooses to celebrate its uniqueness. For this group, acceptance, and not assimilation, is the end goal. This debate is always witnessed in the otherwise silent city of Pune. This year saw the debate getting out of hand which ended up dividing the pride in two different marches - the ‘Traditional’ and the ‘Alternate’, quite similar to the pre-Independence Congress’s division into the Extremists and the Moderates.

What brought forth this divide was the clashing ideologies of the organisers and a large number of participants. The Pune Pride is historically organised by Bindu Queer Rights Foundation (BQRF) run by Bindumadhav Khire, a celebrated queer activist. The theme for this year’s pride was ‘Tradition’.

A Hindustan Times article quoted Khire as saying, “As foreigners can have their way of dressing for parades, we should also follow our own Indian way. We should proudly wear our traditional attire. There are many families who attend the event too. So, there should be a decent way of dressing.” This perspective found many buyers as more than 1,000 people attended the pride, dressed in various traditional and ‘decent’ garbs. So, what is wrong with being traditional and supporting the culture of our homeland?

Mist LGBTQ Foundation and Qutcast organised the ‘alternate pride’ in Pune, which saw around 400 attendants. The founder of Qutcast Aditya Joshi pointed out, “Pride is all about inclusivity and not begging. It’s about being proud of who you are. There are many restrictions in the Pride walk. They don’t include inter-sectional queer issues. Other uncommon issues faced by other identities are also not taken up.”

This pride had no theme and everyone was welcome to bring forward their issues. Politics, identity, caste, class, gender, homophobia and many such rampant issues came to light. Mist LGBTQ’s Founder Shyam Konnur said, “We wanted to remind people what ‘Pride’ meant. It is political and a protest for rights. For a couple of years, there had been moral policing in the organisation of Pride walk. So, we thought that it was time to start a different gathering.” 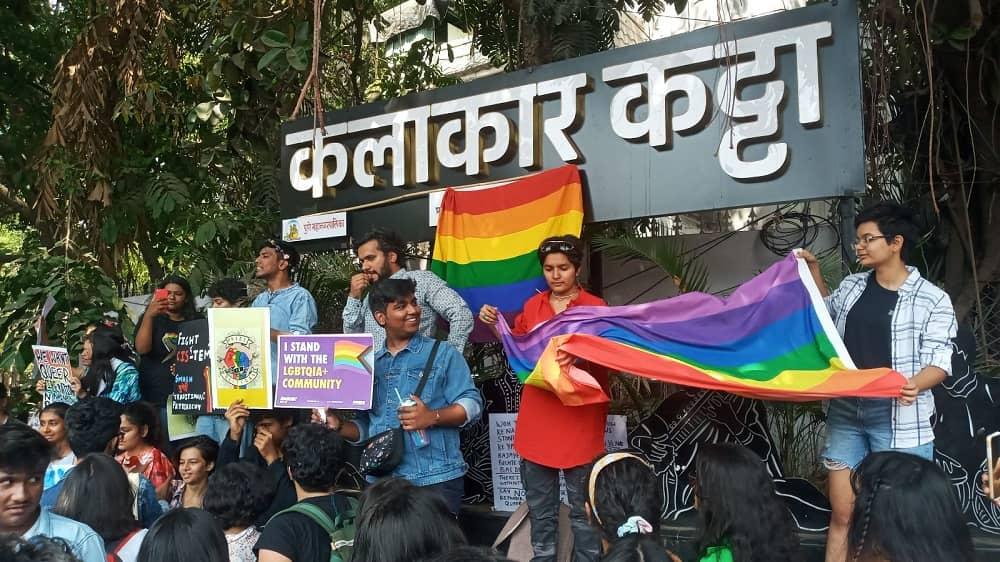 The two prides were successful to say the least. But were the two prides necessary? Is it okay to divide a marginalised community into multiple factions just to promote certain ideologies, just to support certain agendas? The answer to these loaded questions is yes. But things are not as simple as they seem.

The LGBT community, like any other community, is not a homogenous group of people coming together from similar economic, social, racial and various other strata. It is a community composed of a diverse group of people who are loosely bound together by just one similarity - them being different than what is perceived to be ‘normal’ or ‘typical’. No two members of the queer community share the same ideas, same ethics or even face the same problems. Then homogenising them under the garb of traditionalism and nationalism is taking away the most potent arsenals that a marginalised group can have - the weapons of revolution and resistance.

Politics of respectability, as coined by Evelyn Brooks Higginbotham, are at play in any group that was (or is) historically marginalised. The elite of this group try to dissociate or disidentify themselves from the subaltern of the marginalised group just to consolidate themselves with the dominant group and thus enjoy the fruits of privilege. In simple terms, the elites from the queer community try to steer clear of the flamboyant display and assertion of queer identity. They try to disentangle themselves from the celebration of uniqueness by establishing themselves as different from the other queers. Thus, the people who have been historically the ‘other’ end up ‘othering’ their own comrades. This elitism is nothing but a disguised form of homophobia where these elites try hard to show that yes, queers too are just like the heterosexuals. This assimilation comes at the dilution or downright erasure of the unique queer identity and experiences.

Who are these elites? Looking at the profiles of these folks it is clear that most of them are upper-caste, upper-class, affluent, right-leaning people from metros (or people with these aspirations). These people are often cisgendered and possess the privilege of ‘passing’- a controversial term in the contemporary world. Within the LGBTQIA+ community, anyone who passes can pass in a cisheteronormative society without being clocked. Being able to pass offers a higher social standing and safety within society.

In India, most of the ‘traditionalists’ queers enjoy this privilege allowing them to traverse the day to day life with comparative ease. This does not mean that they are not threatened or have faced no problems or homophobia, however, their privileged position enables them to retaliate or seek solutions to these problems.

By restricting the pride into the strict criterion of traditionalism, the Pune pride is trying to gentrify a diverse group by eliminating a form of assertion that is not just a revolt against the heterogenous social norms, but also a celebration of one's true and unique self. The queer community wants support and acceptance, but not at the cost of becoming ‘hetero’. Being queer was, is, and will always be a radical idea. By dividing the pride into two, the traditionalists have managed to divide the queer community into a binary - ‘the good queer’ and ‘the bad queer’.

The good queer is traditional, they pray to their gods, they are nationalist to their core, they are right-wing or right-leaning, they do not tolerate flamboyance or ridicule it, they can be mildly xenophobic, they might be anti-reservation, they may live in big houses, good locales, they have domestic help, they have a decent or well-paying corporate job, they might be liberal… the list can go on and on. According to the good queers, bad queers on the other hand are flamboyant, they are loud, they are obnoxious, they are anti-national, they are Naxalites, they are trying to dilute the queer movement by polluting it with politics, they plan to destroy the traditional gender and societal roles, they want to tear India apart- etc. etc. This dichotomy between these two groups is quite similar to the ‘good Muslim’, ‘bad Muslim’ or the ‘good Dalit’, ‘bad Dalit’ tropes.

The queer identity has always been an identity of subversion, it cannot and should not subscribe to the logic of assimilation and being normative at the cost of forgoing its individuality. The queer elites still have a stronghold on the queer community in India. Their upper/middle-class existence does not reflect the problems that the rest of the queers face in India. It is necessary to deconstruct this idea of Indian queerness and move towards a more inclusive and intersectional agenda. Extreme assimilation will end up marginalising many groups from the queer community itself. For instance, the Hijra community is now allowed to have their own Akhara in the Kumbh Mela - a win as far as queer rights are considered, however, it is not the end goal. Not all Hijras are Hindu, in fact, most of them follow a syncretic faith and to believe that having an Akhara has solved all their problems is delusional.

Removing politics from pride and queer agenda will weaken the movement, reducing it to a simple display of heteronormativity. Pride needs to be intersectional, without which it will not survive.

The author is an early-stage researcher working on Indian mythology, masculinity, queer identity and gender at IISER, Bhopal. He is a budding writer currently writing his first novel.