Lived Experience of Surya: Director Chandan Arora on the period of 1977 to 1992

This is an analysis of the reflections made by the protagonist Surya (R Siddharth) in the film Striker (2010) directed by Chandan Arora. The film focuses on how  the game of carrom is bigger than what it appears to be. On the surface,  the film seems to be the story of Surya (the protagonist) and Jaleel (the don), but the intricacies of this story are many. Anyone aware of the politics of Bombay from 1977 to the post liberalisation year 1992 would be able to make sense of the story.

There will be two parts to the analysis of Chandan Aroras Striker. It covers the vastness of the issue, and the beginning of internal administrative challenges with regards to mill workers, unemployed youth, bomb blasts, Hindu-Muslim riots and relationships of the political agencies. In the first part, I will mostly be talking about the story of Striker. It will cover how Bombay was then and now through the eyes of Surya, and Liberalisation, privatisation and globalisation period. It will also talk about music.

Jaleel (Aditya Pancholi) is the self proclaimed king of Malwani, and Suryakant Sarang aka Surya is a resident of Malwani who is trying to live a normal life. The screenplay of the film focuses on the lives and relationship between these two central figures. As different as their lives are, their aspirations differ too. Surya wishes to go to Dubai and marry Noorie (Nicolette Bird).

Jaleel, on the other hand, is trying to be the mafia don who occupies the land in Malwani (ghetto in North-west Mumbai) which he runs from Versova (Neighbourhood in western Mumbai). Throughout the film, Jaleel becomes an impediment to Surya’s aspirations, but Striker is precisely the story of a new generation of people who resist and revolt against power that Jaleel symbolises and abuses.

When an employment agency robs Surya and others, the agents hold Jaleel responsible. When Surya’s bag gets stolen, the thief is Jaleel. Chandra (Anup Soni) — Surya’s brother is beaten up by Jaleel at a busy intersection. Surya’s mother (Seema Biswas) who is a proud housewife of a Marathi family is humiliated by Jaleel in front of  the entire Malwani community. Surya’s sister Rajani (Usha Jadhav) is also harassed by Jaleel.

Striker as a film is unlike most films that have the city of Bombay as their setting. Striker looks at Bombay sans the rhetoric, the fantasy and the fetishism that many films showcase. It attempts to go beyond these redundant portrayals of Bombay as a city.

This review is an attempt to look at Chandan Arora’s Striker and understand the Hindu-Muslim ghettos within the fugitive political dynamics of Bombay. There are multiple questions that the reviewer tries to address through the course of this article. It is a contemplation on the education system at a certain time period in Bombay, implications of which are borne by the children of the city in different ways. The idea of money and how it attracts a young and vulnerable population like children living in ghettos, is important to look at. 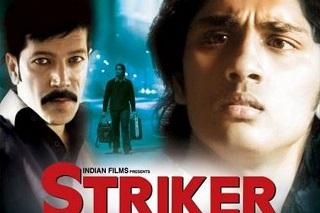 Bombay then and now

Surya says, “Shahar ke lakhon chehron me, mein apne aapko dhundta. Kisi ki chemical mein nikali toh kisi ki diamond mein. Bohoton ne plastic me kamaya, aur kitno ne share bazaar me dubaya. Par Devi ko pura malum tha kya karne ka hai. Chun-chun ke scholarship maari aur bhari se bhari subject li” -- -- “Among those million faces, I used to look for myself. Some earned fortune through chemicals, some in diamonds. Many of them earned through plastic, and many of them lost everything in the share market. But Devi always knew what she wanted. She gained scholarships and chose the toughest of the subjects.” It is also the story of a young fisherwoman Madhu (Padampriya), who runs a beachside bar. It is the story of carrom and those competitions where life becomes more complex than the game.

Carrom, a Bombay without digital intelligence, and communal violence

Striker shows a Bombay which is without phones, networks and digital intelligence. The rigour of consciousness and accurate imagination of the period is captured by minute nuances shot by Arora. The Director has himself struggled in Mumbai for several years, and worked hard in many invisibilized work as light man, assistant of cameras, line manager, etc. Checked shirts and their vibrant colours, hairstyles and big bottom style pants of Surya and other cast transport the audience to a very convincing portrayal of the 1970s Bombay.

“Malwani is also the place where there is 90 percent Muslim population, and 10 percent are Hindus. Sector 4 is dominated by the Hindus, and the rest is Muslim area, it’s the Muslims who are getting murdered more in the riot,” says senior inspector Farroque.

Farroque gives assurance to drop Surya to Malwani once curfew is removed but Surya does not pay heed to Farroqui and bumps into a Hindu fanatics group who applies a red tilak on his forehead as a gesture to acknowledge him as one of the Hindus. The mark is eventually wiped off and replaced with a wrap around his head after he encounters yet another angry mob of Muslim fundamentalists.

The communal disturbances and violence that affected the city after the demolition of Babri Masjid in 1992 are aptly captured without exaggerations in the screenplay. The story by Chandan Arora, Sunita Rajwar and Iqbal Merchant, which keeps at its centre the voices of the neglected populations within Bombay, remains true to its audience through a convincing and tight narrative that it weaves. 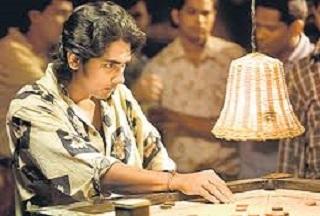 Music and the pre-LPG era in Striker

In Surya’s family, his mother and sister Devi are shown speaking in Marathi in the film. Zaid is spirited with the drama of romance, friendship, ruckus, and is the gullible childhood friend of Surya who is reckless. The metaphors in the film unravel some of the history of the period and the add-on rap song Bombay Bombay projects the 1985 style of Bollywood and life in the metro city. Prashant Ingole is the lyricist for the song which attempts to show the reality of the period, for which he was critically appreciated.

‘Cham Cham’ by Sonu Nigam is played in the background when Surya is romancing with Noori and ‘Piya Bawra’, sung by Sunidhi Chauhan being played in the background when Surya is getting married to Madhu. Surya’s rape of Madhu is passed as social recognition called marriage, while Madhu always took care of Surya at her livelihood source in Malwani when Surya was broken and beaten by Jaleel’s goons. But among all this, it is a story set in a pre-globalisation-liberalisation-privatisation, pre-call centre, pre-cellphone and pre-internet revolution period. Swanand Kirkire’s song Ajab Teri Karni Maula begins when Surya's family migrates to the Malwani. It is a qawwali sung by Swanand himself. The song discloses the impact, regret and guilt of migration. What a person who is migrating feels? The song says ‘Shaher akela hai, lakhon hai galiya… Manjil ko dikhti raah na mileya, Dhoop ka chaanv ka jaal pasara hai… Khwab ko sicha tune, aas ko mara hai…” It means, ‘The lonely city has million paths. No bit path goes to the destination. It’s all a game of light and shadows. In this city, you have nourished your dream, but killed the hope...” 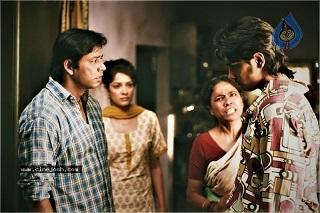 Reverse-migration of Surya’s family and the mill workers’ strike

The film starts with Surya coming to Bombay, and finding a vehicle to go to Malwani. It is December 12, 1992 on screen. He asks the taxi driver who owns a Padmini Taxi. Driver gets angry; because Surya doesn’t know what's happening in Malwani. The other car who gives lift to Surya, lets him know about the tragedy of riots in Malwani. Surya doesn’t get entry in Malwani because the police catch him. Sub inspector Shinde (Sitaram Panchal) abuses senior inspector Farroque on his back saying, “Dekhne aa raha hai ki apni jaat wale kitne kat rahe hai,” loosely translating to “He here to see how many from his community are getting murdered’. Farroque also expresses his anger because he had a ‘Sadbhavna meeting’ with the Masjid and Mandir trusts. He adds, “Samajh nahin aa rha, kaun bhadka raha hai,” which is, “I don't have a clue, who is provoking them.” The shot is then cut to a flashback as we go back to the Bombay of 1977 where Surya begins to narrate the story of carrom, his family and their migration within the city.

A real estate agent comes to Surya's home in a Red Fiat Car, to purchase their house and wants to send them to Malwani. This scene depicts the great Indian mill strike. Dadar, which was also the place of the mill workers’ fight, was where many of the mill workers had to evacuate their homes after the strike. Datta Samant, the leader of mill workers’ association had failed the workers and that was the metaphor behind reverse migration of Surya’s family. Surya’s reflection through voice over -- “Taai aur Dada, visarjan mein Dadar tak jate the. Par mai aur Devi chaupati tak aur Nagpade se aage kabhi gaye nahin. Bombay kitna bada hai, ek kone se dusre kone phenk diye gaye hum log. Inn do konon ke beech pura shahar tha” - During visarjan Surya’s elder sister whom he calls Rajani aka Taai (Usha Jadhav) and Chandra aka Dada used to go till Dadar, but Devi and he never went beyond Nagpada and Dadar beach. But while they were migrating to Malwani, they saw how big Bombay was. They were thrown from one corner of the city to another.

(To be continued in Part 2) 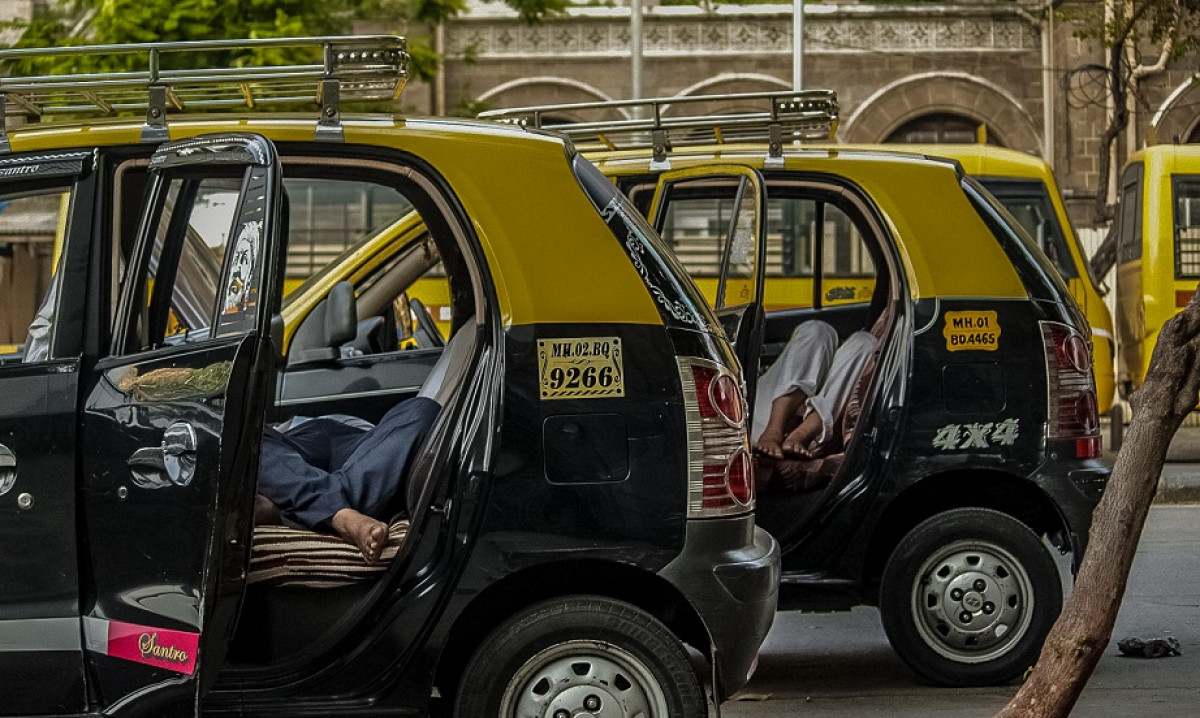