Indie Journal brings you the daily updates that the internet is talking about through various news websites. Here's a glance through some of the National and International news updates, from the Tamil Nadu Governor walking out, Brazilian forces regaining control of the Congress, to the government issuing strong advisory to TV channels.

NDTV reported that Tamil Nadu Governor RN Ravi today walked out of the assembly after Chief Minister MK Stalin moved a resolution asking the Speaker to take on record only the speech prepared by the state government and remove the portions the Governor added to or skipped from the customary address. The Assembly adopted a resolution to record only the Governor's original speech, which was prepared by the state government and translated by the Speaker, the report mentions. RN Ravi walked off in a huff, without even waiting for the national anthem, sung moments later. MK Stalin, in the resolution, said the Governor's action was "against Assembly traditions". Read the full report here. 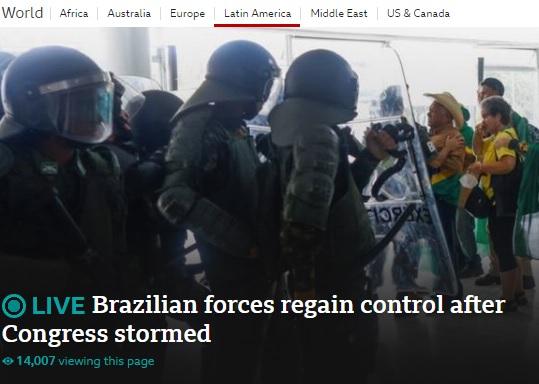 Security forces have regained control of Congress in Brazil's capital after it was stormed by supporters of former far-right leader, Jair Bolsonaro. BBC's live report on the issue says that thousands of protesters entered the Congress building - with some breaking into the Senate chamber - as well as the presidential palace, and Supreme Court in Brasilia. The report adds that police fired tear gas to push back the crowds and arrested hundreds of people. Bolsonaro, who lost the presidential election to left-wing Luiz Inácio Lula da Silva in October, tweeted to condemn the "invasions of public buildings". His supporters are refusing to accept he lost the election. Read the full report here.

The ministry of information and broadcasting on Monday issued a strong advisory to TV channels asking them to adhere to Programme Code laid under the Cable Television Networks (Regulation) Act, 1995. A Hindustan Times report says that the government observed multiple violations over the last few months, including the news broadcast involving Indian cricketer Rishabh Pant who was recently injured in a car crash. The ministry said, as per the report that television channels have reported incidents of accidents, deaths and violence “which grossly compromised on 'good taste and decency'” and were ”quite unpalatable to the eyes and ears of a common viewer." The advisory said reporting violent incidents “without taking the precaution of blurring the images or showing them from long shots” are distasteful, heart-wrenching, distressful, indignifying, sensational. Read the full report here.

China has reopened this Sunday to the rest of the world after almost three years of border closures. TeleSUR reports that it officially downgraded the covid category from level A to B, thus marking in practice the end of the 'zero covid policy'. This new situation comes just one day after the start of the 40-day period known in Chinese as "chunyun," the world's largest annual migration, which happens every year during the Lunar New Year. As per the report, the first flight to take advantage of the paradigm shift was CZ312 linking the Canadian city of Toronto with Canton (south). Read the full report here.

Dozens of people have demonstrated in front of a prison in the Iranian city of Karaj amid reports that two more men could soon be executed in cases linked with Iran’s ongoing protests, Al Jazeera reports. The report says multiple videos posted online showed a crowd gathered in the early hours of Monday in front of the Rajaei-Shahr Prison in Karaj near Tehran in an effort to prevent the executions of 22-year-old Mohammad Ghobadlou and 19-year-old Mohammad Boroughani. The families of the two men were also among the crowd. Ghobadlou was sentenced to death for allegedly running over several members of the security forces with his car and killing one, while Boroughani was convicted of “moharebeh”, or “waging war against God”, for allegedly using a knife to kill a member of the security forces. Read the full report here.