Indie Journal brings you the daily updates that the internet is talking about through various news websites. From updates on the Uttarakhan Avalanche, to the Ex Maharashtra Home Minister Anil Deshmukh being granted bail.

NDTV.com reports that Twenty-nine trainee mountaineers have been trapped after an avalanche hit the 'Draupadi's Danda-2' mountain peak in Uttarakhand. The report says that eight of them have been rescued and efforts are on to bring the others to safety. All the trainees belong to the Nehru Mountaineering Institute in Uttarkashi. The report also quotes Uttarakhand police chief Ashok Kumar who said helicopters of the Indian Air Force have been pressed into action to rescue the trapped trainees. Read the full report here.

The report by Newslaundry covers investigates a case from Uttar Pradesh where in July 2021, the Uttar Pradesh police claimed to have arrested two “active members of Ansar Ghazwat-ul-Hind”, the alleged affiliate of Al Qaeda in India. The report questions if the arrest of Minhaj Ahmad and Museeruddin, who were planning to “unleash terrorist activities before August 15 in different cities of the state, including Lucknow”, has any evidence to back it. Read the full report here. 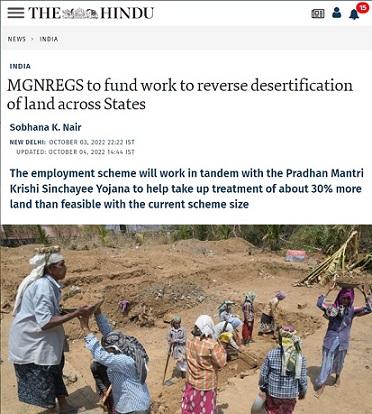 The report, informs that according to the Desertification and Land Degradation Atlas published by the Environment Ministry in 2021, at least 30% of India’s total geographical area is under the category of “degraded land”. The report says that due to the limitation of funds to deal with the gargantuan task of restoring degraded land and reversing desertification in the country, the government is now planning to bring convergence between the Mahatma Gandhi National Rural Employment Guarantee Scheme (MGNREGS) and the Pradhan Mantri Krishi Sinchayee Yojana (PMKSY). Read the full report here.

The report describes that the satirical newspaper, The Onion, has filed a legitimate legal document with the US supreme court, urging it to take on a case centered on the right to parody. To make a serious legal point, the filing by the Onion uses an argument filled with 'total nonsense'. The satirical yet serious filing claims the global Onion has a readership of 4.3 trillion, the filing describes the publication as “the single most powerful and influential organization in human history”. Read the full report here.

The update by the Indian Express says that a single-judge bench of Justice N J Jamadar of the Bombay High Court Tuesday granted bail to former Maharashtra home minister Anil Deshmukh in a money laundering case lodged by Enforcement Directorate (ED). It says that Deshmukh, however, will continue to stay in CBI custody. According to the report, the court asked Deshmukh to furnish a personal bond of Rs 1 lakh and sureties of the like amount and also put conditions on him for attendance before the trial court and the investigating agency. Read the full update here.