News Dabba 25 May: 5 stories across the web for a balanced news diet

Anushka Vani brings you the daily updates that the internet is talking about through various news websites. Here's a glance through some of the national and international news updates, from the Texas Mass shooting that killed 19 children, the Shanghai Covid-19 death toll going down to zero, communal tension among school students, to the government being more careful about the crop inflation rate. 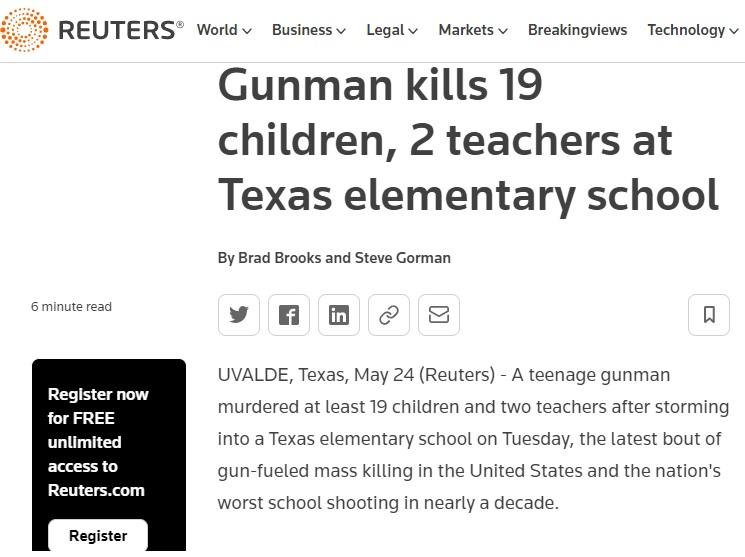 Reuters reported the mass shooting that took place at Robb elementary school in Uvalde in Texas on May 24. The gunman was an 18-year-old teenager who reportedly killed 19 children and two teachers. According to the report, this gun-fueled mass killing is the nation’s worst school shooting in nearly a decade in the US. The teenager suspect is identified as Salvador Ramos, who apparently also shot his own grandmother, who survived, authorities said. The mass shooting was stopped after he was killed, apparently shot by a police officer, as reported. Read the full report on Reuters.

India must account for Human and Ecological costs of highway expansion, NewsClick report

NewsClick’s today’s report is focused on the highway expansions that have been known to improve connectivity but still have certain negatives to them. The National Highways Authority of India (NHAI) has expanded its budget for the rapid highway expansion projects which is among the top priorities of the Central Government. The report has shared the estimated expenditure of the NHAI in 2020-21 was Rs 46,062 crores. It has also added that despite severe resource constraints during the Covid-19 pandemic, this year’s budget estimate was raised significantly to Rs 57,730 crores. Read the full report on NewsClick.

The South China Morning Post has reported that the new Covid-19 cases in Shanghai have fallen for the fourth consecutive day, plunging from 19.4 percent in the past 24 hours to 387, which is the lowest since March 19. While the cases showing symptoms slid by 24.1 percent to 44. Additionally, the daily death toll has fallen to zero. The trend for new cases is also declining, days before the two-month lockdown would officially end. Read the full report on SCMP.

Children are wearing threads to schools to assert their caste identity which has resulted in a spiral of violence that also led to a student’s death, Scroll reports today. The report is from a southern village in Tamil Nadu, Adaichani, where a 40-year-old father is caught in full rage holding his 16-year-old son by his collar and with a small shovel in his other hand. The reason for the rage was because the son attended a village temple festival despite being directed to stay at home. According to the report, the father had directed his son to stay at home because he claimed that things outside were not normal and safe, as children fighting against different caste identities led to several student injuries. Read the full report on Scroll.

An opinion piece in the Print today is in continuation to the imposition of the ban on the export of wheat, even though the ban was lifted for which reverse credit had been obtained before May 13. According to the author, the suddenness of the ban led to chaos at the ports and the loading of ships and unloading of trucks came to a halt. Days after the disruption at the ports, the loading of wheat resumed with a ship that sailed to Egypt on May 20. The article states that the government may have taken note of high food inflation in the wholesale price index (WPI) of 8.8 percent in the month of April 2022, while the consumer price index (CPI) was 8.4 percent. It further also adds that crops like cotton are also experiencing high inflation, with the prices of raw cotton being almost double that of last year. Read the full report on ThePrint.