News Dabba 14 June: 5 stories across the web for a balanced news diet

Anushka Vani brings you the daily updates that the internet is talking about through various news websites. Here's a glance through some of the National and International news updates, from the unveiling of Agnipath, Hondurans fighting drought and poverty with cashew, Pune Metro to reduce train frequency on two lines as ridership falls, UK unemployment edging higher, to US Jesuit priests raising $100 million for the descendants of slaves.

The Centre unveiled the ‘Agnipath’ scheme which is supposed to be a radical recruitment plan for armed forces which aims at cutting down salary and pension bills and freeing up funds for urgent procurement of weapons, reports NDTV. As Defence Minister Rajnath Singh announced the programme, he mentioned that it was a ‘historic’ decision. The Chiefs of all three services; Army, Navy and Air Force were present for the launch. The report also states that under the scheme, about 45,000 people between the age of 17.5 years to 21 years will be inducted into the services for a four-year tenure. The recruitments for the same will begin within the next 90 days and the first batch will be ready by July 2023, says the report. Read the full report on NDTV.

The Guardian reports on Hondurans fighting drought and poverty with cashews

According to a report by the Guardian, a female-led community group in Hondurans is diversifying crops to adapt to the climate crisis. It narrates the story of Lucia Alvarez, who used to grow Corn, which is a staple of the Honduran diet, was struggling to survive. As per the report, the work opportunities in the region where she resides are scarce, and it was a dry corridor which means it either had months of drought or unpredictable rains, which would damage and ruin the harvest repeatedly. Over the years then, she began harvesting Cashew trees which have proved to be a game-changer for her. More people in the region are now pivoting to Cashew trees and harvesting the seeds, the report states. A native crop to the country, the report adds, Cashew could help people build resilience against the climate crisis. Read the full report on The Guardian.

Indian Express today reported that the Pune metro has reduced the frequency of trains on two lines. Metro Public Relations Officer Hemant Sonawane said, “The ridership of Metro rail has been dropping since its launch, there was much excitement initially that made citizens take up the joy ride, however, it has now come down, but it is expected to rise again after the extension of the routes.” The report stated that the Pune Metro has reduced the number of trains on the PCMC to Phugewadi route while extending the gap between two tarins to up to one hour. Read the full report on IE.

The Economic Times has reported that unemployment in UK has risen to 3.8 percent in three months to the end of April, remaining close to a 50-year low, as mentioned by the Office for National Statistics (ONS). With soaring inflation, it has caused the value of wages to fall at the fastest pace in more than a decade, as per the official data. The report also added that the ONS head of Economics Statistics Sam Beckett said, “pay in real terms is falling at its fastest rate in over a decade”. The soaring inflation in the UK has soared to 9 percent, which has caused a cost-of-living crisis for millions of Britons. Read the full report on ET.

US Jesuit priests to raise $100 million for descendants of slaves, WION 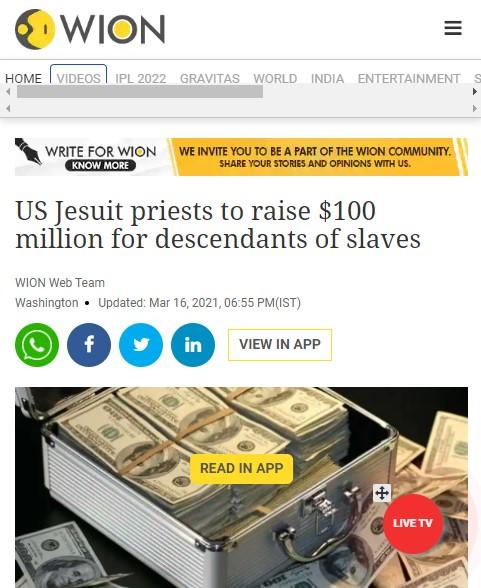 WION has reported that a prominent order of the US Catholic priests has created a foundation to raise a reported $100 million for the descendants of the slaves it once owned and sold and promoted racial reconciliation across the country. This Jesuit priest’s foundation, named Descendants Truth & Reconciliation Foundation, is said to be in a partnership among descendants of both enslaves and enslavers. Read the full report on WION.