Manasa Chellappa | Santishree Dhulipudi Pandit, professor at Savitribai Phule University, has been appointed the first woman Vice-Chancellor of Jawaharlal Nehru University (JNU) on Monday. Just like her predecessor, M Jagadesh Kumar, who is now appointed as the University Grants Commission (UGC) Chairman on February 4, 2022 and had a controversy-filled tenure in JNU previously, Pandit's past tweets have raised some concerns for the future of JNU.

Pandit, a professor in the department of politics and public administration, is the 13th Vice-chancellor of JNU and she is also an alumnus of JNU. She pursued her Mphil and PhD at the university. Pandit started her teaching career at Goa University in 1988 and later went to teach at Pune university in 1993. Besides this, she is also a member of various statuary bodies like the UGC, Indian Council of Social Sciences Research and a Visitor's Nominee to central universities.

Pandit's predecessor Kumar is a professor in the Department of Electrical Engineering at IIT Delhi. He has pursued his Master's degree and PhD in Electrical Engineering at IIT Madras. He was appointed as JNU VC in 2016. Right from the sedition row in 2016 to his speech about installing a battle tank on campus during a ceremony to commemorate the Kargil victory in 2018, his tenure at the institute was filled with controversies.

Within the second week of his tenure in 2016, Kumar got involved in a controversy, when students protested against the capital punishment to the Parliament attack convict Afzal Guru, despite the University withdrawing permission to hold the event. There were clashes among different student groups. There were also allegations that a group of students raised anti-India slogans. All of this led to sedition charges against students. The then JNU Students Union (JNUSU) president Kanhaiya Kumar was arrested.

Before 2014 we saw that according to academic achievement and vision, the best professor was appointed as VC and President of the institution, but after 2014, the criteria was changed. Let's meet the new chairman of UGC, Professor Mamidala Jagdish Kumar, VC of JNU. #JNU pic.twitter.com/Ehz2SuG4O6

In November 2016, not even nine months after the incident, a JNU student Najeeb Ahmed went missing from the university campus after a violent confrontation with the RSS-affiliated Akhil Bharatiya Vidyarthi Parishad (ABVP). As of today, the student is still missing and the students time and again blamed the then VC Kumar for not putting in enough effort.

In 2017, Kumar prohibited demonstrations and protests in the vicinity of the 'administration block', which houses the offices of top varsity officials. The order fueled more protests by the students as it broke the university’s tradition of protests. Kumar also passed an order to make attendance compulsory at the university for the first time in its history, even for PhD programmes.

Around October 2019, the administration announced an increase in hostel fees and made several changes to the Hostel Manual, including dress codes and curfew timings. This led to students' protests in November 2019, as they believed that the fee hike would affect the underprivileged students. The police curbed the protests using water cannons on them and even manhandled many.

On the night of January 5, 2020, a masked mob, allegedly comprising ABVP members armed with sticks and hammers, attacked protesting students and teachers at the JNU campus. The JNUSU issued a statement after the incident, on January 6, in which it claimed that Kumar was “behaving like a mobster who perpetuates violence in the university he is supposed to administer.” After this, Kumar issued a statement describing the violence as “unfortunate”.

Now with Kumar's controversial history, the new appointment has again raised concerns, as several screenshots of her controversial tweets, including ones in which she s seen making derogatory comments against the JNU students, farmers, etc., have resurfaced. Since the screenshots of the tweets are going viral, Pandit's Twitter account has been deleted.

Concerns are now being expressed on whether the new VC would continue to make decisions like those of her predecessor. Activist and President of JNUSU Aishe Ghosh tweeted 'Dismantling institutions is what Mamidala has expertise in. Exactly why the BJP Govt. chose him to take over the position.'

Ghosh also tweeted earlier today that she, along with other SU members went to the VC's office to meet her, but they were denied entry. The JNUSU is expected to release a statement about the new appointment later today, Ghosh said when contacted.

Today, I along with other SU members reached JNU VC's office to meet her and hand over a charter of demands on behalf of the student community. We wanted to highlight the issues, hoping for discussion.We were denied entry, despite VC's assurance to work along with the students. pic.twitter.com/EfOVu27VnV

Pandit already had her plate of allegations in 2008 at SPPU regarding alleged irregularities in letting Indian passport-holding students secure a backdoor entry to courses through the quota marked for Person of Indian Origin (PIO) students. She was indicted for aiding over 1,800 students by violating the university norms between 2002 and 2007. By the public's opinion and their findings with Pandit's past tweets, students seem to worry about what the future of JNU will be.

Swati Singh, activist and former councilor of JNUSU, expressed the uncertainty students feel about the new VC. She said that students are intimidated and disappointed because Pandit's are Islamophobic, anti-student tweets that also target the students of JNU.

"With the break of her Twitter controversy, many students have amplified feelings of uncertainty and intimidation. They (tweets) are very Islamophobic, anti-student and in fact, she has called JNU students losers and Naxals. All these tweets are really problematic and coming from the new VC is very shameful. We think that she should take accountability for those tweets if it is her Twitter account as it is now deactivated," said Singh. 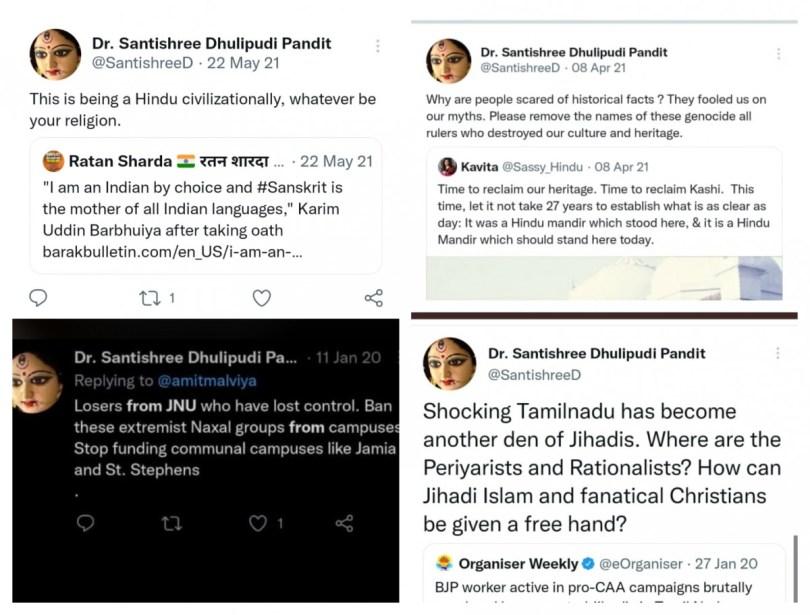 Singh added, "We expect that, unlike the last VC, Pandit will initiate a democratic discussion with students. We are expecting the new VC to be different and discuss student issues with us. There are a lot of ongoing issues on the campus."

Singh also said, "Pandit being the first female VC, we expect her to take actions to improvise and bring back the committee Gender Sensitisation Committee Against Sexual Harassment (GSCSH), which was discontinued and replaced by an Internal Complaints Committee (ICC). It is a bogus body, it does not work."

Another member of the Students Federation of India (SFI), who expressed his opinion on the condition of anonymity, had similar concerns as Singh. He said, "The tweets are horrible and by evening she had deleted her Twitter handle as well. Yesterday, we saw on Twitter that the VC met the members of the ABVP. However, she did not meet the members of JNUSU today. We wanted to meet the VC and submit our demands. But as usual, we were not allowed. Right now the students are not happy and we did not expect the appointment of a VC like her."