A bear who has all his fingers in all the honey pots.

Hrishikesh Arvikar | Adani Enterprises (75.3 Billion current net worth) rebranded themselves as ‘Bravus’ in Australia. Little did they know that Oxford English Dictionary meaning for Bravus is “A crook, or a bandit, or a cut-throat.” They had mistaken it for brave/courageous. Unfortunately, the crooked often think they are brave. While the world turns to other sustainable methods, Adani is circling Australian coal to manufacture PVC in India. Therefore, the idea that the coal being transferred to Indian ports will be only used for oil is presumptuous. Annexure 7: Manufacturing Processes of environmental clearance report for the Mundra project outlines precisely how the coal will be used to generate PVC, and the details can be found here.

While many of us may not understand what the extraction and chemical processes mean, we can understand the geopolitics and, indeed, the chronology of events, as Indian Home Minister Amit Shah would want us to. Let us begin with the present.

2021-Adani is attempting to transport Coal to India. The Mundra-based plant will manufacture 2 million tonnes of plastic from it per year.

2021- AUKUS (Australia, UK, and the USA)- attempts to ward for China’s power, economic and political, and nuclear threat.

2020-Setting up the global proposition of the Chinese wet-market origins theory of COVID-19, Australia faces economic hostility from China. And China would not use the Australian coal sitting in their ports even when it has been on ports, ships, and cargoes for months. It is being sold to India at a lesser price.

Adanis have been working since 2009 to create the Abbott Point to carry out Carmichael Coal and Rail Project (which could be called CCRAP, as a hilarious link to Juice Media’s scathing video about the Project.) Aboriginal people of Wangan and Jagalingou have stood against the process of stealing their lands. Nothing changes in good old Aussie colonialist practices that are being used in the present. The Bravus-led project will affect The Great Barrier Reef, deplete natural resources, affect the water table, yet by all governmental approvals, carry on like they do in India.

In a beautiful scene from Casino Royale, Le Chiffre, meaning the cipher, or the number, (i.e., the cryptographic code- who is the villain, played by Mads Mikkelsen), leads Bond to discover that he's not after oil but after water. Such incredible inversion establishes links between industrial extraction and the multiplicity of its uses. There are many guises in which they are performed and put out in the public domain through clever media spin management. Where should we be looking, then? The real intent may be in the footnotes of a governmental approval application, an environmental clearance sought, and the challenges it meets from the public. The judicial processes are supposed to uphold the balance between industrial proliferation and extraction of natural resources.

The judicial processes are supposed to uphold the balance between industrial proliferation and extraction of natural resources.

Adani’s father was a textile merchant from Ahmedabad. Adani dropped out of his second-year commerce course, and later, as Wikipedia tells us, he worked for a diamond sorter business. Since 1981, Adani has been working with PVC. Since 1994, Adani has been managing the Mundra port. A bear has all his fingers in the pot of honey, but then some have all fingers in different honey pots. Then there are those who have multiple fingers, multiple hands, and multiple pots. Adani got a 6-billion-dollar contract from Solar Energy Corporation of India. So, while Bravus extract coal to make PVC on one end of the Australia-to-India pathway, they got solar energy contracts on the other side in India. Hedging bets, till they pay-off or till they don’t. Pit one side against the other, cause f(r)iction in the market, raise the stakes, lower the expectations, containment, and escalation of assets, solidify and liquify them, mergers and acquisition in full operation. This ultimately creates collision that generates fiscal heat, tempering the market to keep the engine running as the fuel gets consumed… more and more and then some more!

‘The Petition states that 102.38 hectares out of the 253 hectares of the project site are forest land and that the existence of full-grown trees on the land has been concealed by the Project Proponent in the EIA Report. Further, the EIA report failed to consider the concerns raised by the farmers and fishermen living in and around the project site that has been historically affected due to the activities of the Adani Power Plant and the Mundra Port.’(…) ‘EIA Report suffers from various deficiencies, and the Expert Appraisal Committee also failed to properly appraise the environmental impacts of the project including concerns raised by the affected persons in the public hearing.’

In Mother India, Mehboob challenged the Nehruvian welfare state’s idea of developmentalism (Nehru pitched ‘dams being the temples of Modern India’) by showing Radha (Nargis), inaugurating a dam, and blood flows. So, we ought to ask what our idea of ‘development’ is? Three crucial points from Aditya Nigam’s book Desire for Development could be useful here. One, Capital has produced a desire for consumption more than the production itself. Two, the Automobile of desire has increased the speed of consumption. Three, the economy ought to be a subset of ecology and not vice versa. Nigam also points to how the green revolution has led to the degradation of the landmass and natural resources.

This tactic is known as ‘astroturfing’

After 2012 when Nigam wrote the book, we have had a sea-change in digital proliferations. And some grassroots accounts created social media opinions in favour of Adani’s image around the presumed mining boom-to-come in Queensland. This tactic is known as ‘astroturfing’, where an army of fake accounts targets the public to alter their opinion. This is also indeed coupled with the ‘microtargeting’ strategy of the algorithm and ‘filter bubbling of the platforms. Microtargeting goal orients, and hunts for an exact set of people to be influenced, and filter bubbling ensures that the content reaches them.

Researchers Mitchell Hobbs, Hannah Della Bosca, David Schlosberg, and Chao Sun in their work on astroturfing strategy used for Adani Coal Mines note the role of two ideas. Issues signaling and conflict expansion are outsider lobbying strategies that are both reactive and creative.

They note that this helps agenda setting in the real infrastructural world, and affective impact through the passion-oriented emotive world which may seem abstract at times but relates to the obviousness of the goal, but the identities of the social media post remain hidden. Today social bots can be created and manufactured to change public opinion. Using Social Media Network Analysis (SMNA), the authors indicate –

SMNA has, then, the potential to serve the public policy process by highlighting the emergence and influence of certain voices on social media, which might be motivated by corporatas goals at the expense of communitas public interests.

However, they did not include a simple notion that ‘human actors’ are paid to carry out the same tasks as bots in India, and perhaps, at a lesser cost than that of a bot. So much for data analysis through software to not consider the human element involved! To err is human! 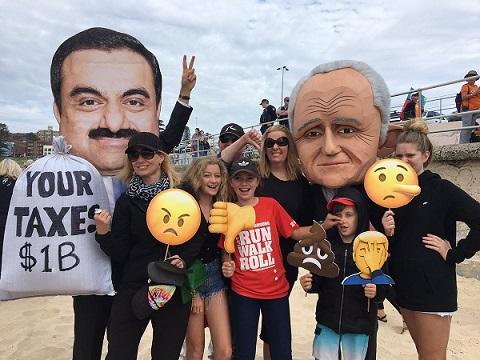 In a global study done in 2018 of four countries- viz., India, China, Australia and USA in terms of their coal policy researchers Blondeel and De Graaf – found the countries - exhibit a puzzling variance in their coal mining policies, while China and the USA adopted temporary bans on the approval of new coal mining leases in 2015 and 2016, respectively, Australia and India did not.

They note the bottom-line simply. India is the biggest coal importer; Australia is the biggest exporter.  But as news reports show, four big Australian banks have refused to fund new thermal projects. India generates 70 percent of its electricity via coal. They add- Given Australia’s particular political economy of coal, India is eyeing Australia’s coal resources for its development, while vice versa Australia sees India as a potential key export market for its consolidation as an energy ‘superpower’.

And that India is the only country out of the four to have a Ministry of Coal, and as another researcher, Lahiri- Dutt argues there are five economies of coal in India viz., Coal India Ltd (CIL), CIL Contractors, Captive, Informal-non-legal, Informal- illegal. She adds that the- conceptual position has equated energy security with strategic and military security: on the one hand, resources have become the environmental trigger of conflicts and crises; and on the other, the sense of urgency has helped the Indian state to shed ethical values and its responsibility to its poorest citizens.

Global coal transactions are costing us more than what they are providing.

The intensifying automated machine of capitalist desire is consuming us from within and from around us and this shall continue till emissions spread the smoke all over. The global coal transactions are costing us more than what they are providing. Lahiri-Dutt’s searing last paragraph of the paper- The diverse worlds of coal in India: Energising the nation, energising livelihoods adds the dimension of labourers, tribals, and historical communities of the land. The following statement is then true of India, Australia, USA and China.

In India's coal-bearing tracts, the sense of urgency that accompanies the framing of the crisis has allowed private companies to invest in resource extraction from peripheral areas. But the land and mineral ownership laws have remained of colonial vintage. The growing resentment and resistance to land acquisition for mining-industrial-urban requirements is rooted in the reality that the local poor receive the fewest benefits from such developments.

At its best, they are hired either as wage labourers by the contractors or are pushed into informal coal mining that is presented as an illegal activity. The acquisition of non-transferable tribal land for coal mining and related projects by privately-owned companies, and the state's complicity in facilitating the various formal and informal strategies adopted by the companies to gain access to land, have encouraged the dispossessed local rural communities to take a share of the coal for themselves. The case of an informal, non-legal coal economy graphically illustrates how outdated the mineral governance framework is, and how purely cosmetic changes of laws fail to adequately protect the interests of the weak and the poor.

Hrishikesh Arvikar is a researcher based in Australia.